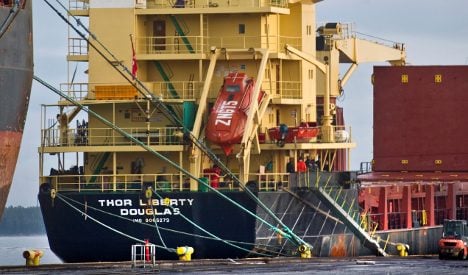 “I can’t speak for Finnish customs, but as far as Germany is concerned, the shipment was legal,” a spokesman for the customs office in the northern German town of Oldenburg told The Local on Thursday.

The “Thor Liberty,” belonging to a Danish company, flying a British Isle of Man flag, and manned by a Ukrainian crew, was stopped Wednesday during a routine check at the southern Finnish port of Kotka. German media reports say the missiles were marked as “fireworks.”

The high-tech weapons were reportedly loaded onto the ship at the Papenburg docks on Germany’s North Sea coast. The export permission documents were registered at the customs office in Emden, in the state of Lower Saxony.

There was confusion over the destination of the missiles, as the Finnish police said the ship was on its way to Shanghai, China, though the sale was reportedly to South Korea. “The final destination was South Korea, though I can’t say what route they were taking,” the German customs official said.

Finnish police also said the ship was not licensed to carry a weapons cargo.

According to a report in Bild newspaper, Thomas Mikkelsen, head of the Danish shipping company Thorco, was surprised to hear of the missiles being transported on one of his ships, but refused to comment further.

Patriot systems are US-made surface-to-air missiles used by several countries around the world, including Germany. South Korea has bought second-hand Patriot systems from Germany in the past.