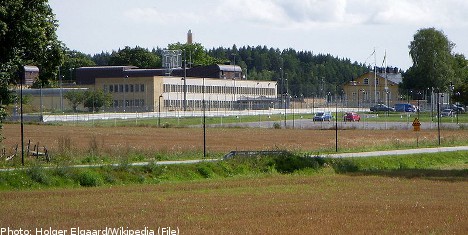 The escaped prisoner was an inmate at Hall prison (pictured)

On his way to visit Skansen, Stockholm’s popular open-air museum, the man suddenly ran off and jumped into a waiting car.

The man has been sentenced to prison for two and a half years.

“He had a four-hour long leave, and had two experienced guards with him, but he ran away, and got into the car,” said Elisabeth Anestad, Hall’s manager, to news agency TT.

The man is convicted of grand larceny and handling stolen goods. He was at Hall because of bad behaviour at other prisons.

He was to be released on parole in July, and this was the 24-year-old’s first leave from prison.

“Shortly after parking he ran off and was chased until reaching the other car, but our staff didn’t succeed in catching up to him,” said Anestad.

He was chased some 300 metres, and nobody was injured in the incident.

The escape occurred at 10.45am, and the man is now wanted.

Hall is one of Sweden’s three maximum-security prisons.

Although the 24-year-old hadn’t been sentenced to a long prison sentence, poor behaviour can lead to prisoners being moved to a higher security level.

The man now faces paying a bill of up to €50,000 after Brandenburg’s justice ministry had to pay for the immediate replacement of 600 locks in the prison, Bild newspaper reports.

A photograph of a key could provide enough information for a skilled locksmith to be able to replicate it, leading the prison to fear that keys could be smuggled through to the inmates.

The justice department received a tip off that the intern had shared a picture of the master key for the JVA Heidering prison at the end of February. “A large number of cells and corridor doors had to have their locks changed,” a spokesman told Bild.

Some twenty prison guards worked into the early hours of the following morning to ensure that all the locks were changed.

The prison is situated just outside the city boundaries of Berlin on the southwestern edge of the capital.

“The internship ended with immediate effect and the intern was issued with a ban on entering the building,” the spokesperson said.