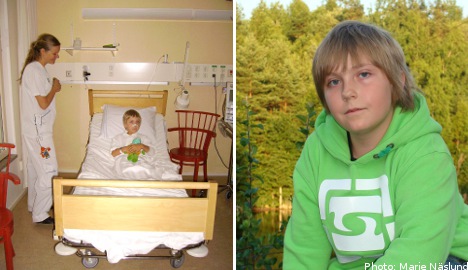 It’s been four years since Kevin, who lives in the village of Färila outside Hudiksvall in northern Sweden, stayed at the Hudiksvall Hospital.

But he still remembers the long days spent there.

“There weren’t many toys to play with there,” Hansson told The Local.

Hansson was born with an unusual genetic defect that makes it difficult for his stomach to digest food on its own.

As a result, frequent and sometimes lengthy hospital stays were a common occurrence for him during his early childhood.

The not altogether happy memories remain with Hansson, who earlier this year used them as inspiration to help others.

This past summer, Hansson started thinking of the sick children at the hospital now, and wanted to do something special to make their time there more fun.

“I wanted to make sure that the kids staying there had something to play with,” he said.

In the months since, he’s been saving up all his pocket money, and recycling cans and bottles to collect extra cash.

Krona by krona, his piggy bank slowly filled up.

Now Kevin has broken it open and used the money to buy Christmas gifts for the sick children at the hospital.

“It took time to save all that money, but now it feels good to have done something good,” he said.

Yesterday, he and his mother Marie went to Hudiksvall’s Hospital and dropped off his gifts.

Together they unpacked all manner of toys: dolls, DVDs, tractors, Barbies, crayons, and a doll’s bed.

“I met some kids at the hospital yesterday, and they seemed to think the toys were fun,” said Kevin, who hopes that others will follow his example.