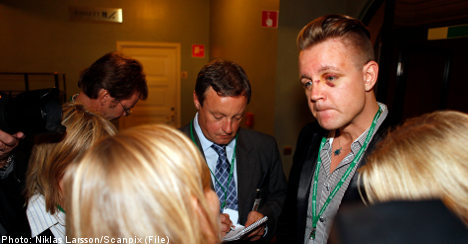 MP Fredrick Federley was beaten outside his flat in Stockholm in Sept. 2010

The full extent of the threats against Swedish politicians is now to be mapped for the first time, as the Swedish National Council for Crime Prevention (Brottsförebyggande rådet – Brå) starts work on the world’s largest investigation of its kind.

All of the roughly 15,000 people in Sweden that hold a clearly defined political office will take part in survey.

“We’re conducting a complete investigation of politicians at all levels, municipal, county and national, to see if they’re subjected to threats, and how, in their roles as elected officials,” Victor Ståhl, investigator at the Council for Crime Prevention, told The Local.

“It’s believed that there is an increased threat against this group, but there’s plenty of uncertainty in the matter, and that’s why this survey needs to be done.”

A smaller study, conducted in 2004 by the Swedish Association of Local Authorities and Regions (SALAR), showed that roughly 16 percent of municipal politicians had been exposed to violence and threats, and 20 percent at the county level.

“We need to get a good overview of how common these crimes against elected politicians are, what character the crimes have, and development over time, since they could constitute a threat to our democracy,” said Ohlsson in a statement on Thursday.

Brå’s first survey will be published in 2013, and will then be followed up once every two years.

TRAVEL
SURVEY: Are you planning to travel abroad this summer despite the pandemic?
Url copied to clipboard!