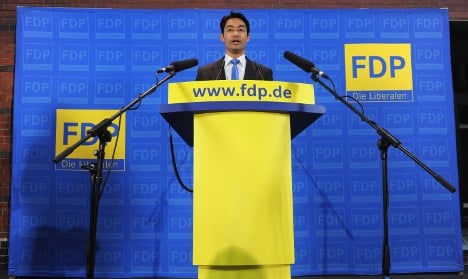 Rösler, who is also economy minister and vice chancellor, announced that an internal ballot had narrowly failed to achieve a quorum.

In any event, more than 54 percent of members who took part in the referendum had opted to back the party line in supporting the eurozone’s €500-billion ($650 billion) permanent bailout fund, he said. The party’s 65,000 members have been allowed to register their vote since October.

“The FDP is and remains a clearly pro-European-oriented party,” Rösler said. Triggered by eurosceptics in the party, which has been in power with Merkel’s conservatives nationally since 2009, the ballot failed to get the necessary 21,500 votes – missing out by just over a thousand

Merkel has won parliamentary backing in recent months for bolstering rescue funding to help eurozone countries struggling under the debt crisis, despite fears of a backbencher rebellion.

Even before the result, the FDP vote provoked controversy due to criticism over the way it was organized – with several leaders declaring it would fail days before the deadline for votes to be cast.

On Wednesday, FDP general secretary Christian Lindner announced his abrupt resignation, adding to the party’s woes after a leadership crisis and a rash of poll defeats.

The resulting instability briefly threatened to derail Rösler this week, as the result of the vote was still open. A loss would almost certainly have led to a new leadership battle.

Foreign Minister Guido Westerwelle, who was replaced by Rösler as head of the FDP in May, welcomed the result saying the pro-business party remained “on a course of European integration.”

The rebel vote was initiated by Frank Schäffler, long-term eurosceptic thorn in the FDP’s side,