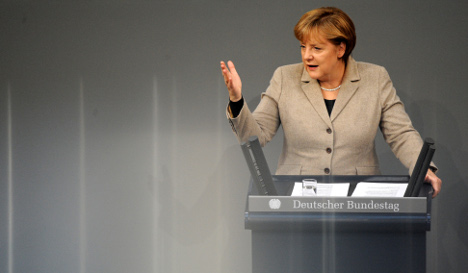 “The vision of a real political union is beginning to take on contours,” she told lawmakers in an address to the lower house of parliament, the Bundestag, following last week’s EU summit.

European Union leaders from 26 of the 27 member states agreed on Friday at a high-stakes Brussels summit to back a Franco-German drive for tighter budget policing in a bid to save the eurozone.

After Britain, which does not use the euro, blocked changes to an EU-wide treaty, the other 26 EU states signalled their willingness to join a “new fiscal compact” imposing tougher budget rules.

However, the Czech Republic has since put the deal on hold until the text is finalised.

Merkel warned in her speech to MPs that the road to overcoming the crisis that threatened the future of the euro would be long and would face setbacks as there was no quick and easy solution.

“Getting over the state debt crisis is… a process. This process won’t last weeks, it won’t last months, it will last years,” she said. “This process will be accompanied also in future by setbacks.”

Merkel also voiced regret at London’s decision to stay outside the pact but stressed that Britain remained an important partner including on issues of competitiveness, climate change and trade.