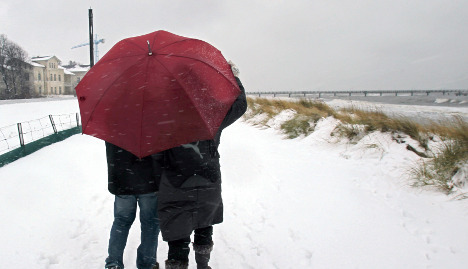 Wednesday night is set to be wet, with showers covering the majority of the country and lows of one degree Celsius below zero. In much higher areas, there will be steady but light snowfall through the night.

This rain and snow will continue into Thursday, and winds will begin to pick up, bringing a changeable day. Snow will continue to fall in areas over 600 metres above sea level. At lower elevations, hail and thunder storms are a possibility from north to south.

Temperatures will, however, rise to an unseasonably warm nine degrees over the course of the day.

During the night on Thursday, temperatures will sink to below the freezing mark across the country, with only a few areas remaining in positive figures. Strong southwesterly winds will begin to pick up, particularly in the west and in hillier areas, where gales are possible.

“Just how strong the winds will be depends on the path the low pressure system takes,” said DWD meteorologist Christian Herold in a statement. “We do know, however, that the winds will be much stronger in the mountains.”

Strong winds will progress into Friday, with gales becoming more widespread. Special caution should be taken in exposed mountainous areas, where wind speeds will not only be dangerously high, but accompanied by snow.

Prolonged rain will fall on the south of the country, while a thick covering of cloud and scattered showers are forecast in other regions. Similarly to Thursday, temperatures will remain above the freezing mark, reaching highs of eight degrees Celsius.

By Friday nighttime, the wind will have eased slightly. Rain will continue to fall from north to south. Temperatures will vary greatly across the whole of Germany, with some regions experiencing a warm night at around six degrees, while others will see temperatures drop to one below zero.

Clouds will gather further on Saturday, with the chance of snowfall nationwide at higher elevations. The west and north of the country may also be hit by more thunder storms. Temperatures will remain comfortably around six degrees.

In the mountains, winds will reach gale speeds once again, particularly in exposed areas. By the afternoon, however, they should have calmed down considerably.

Temperatures will fall during Saturday night to below the zero mark in the middle and southern regions of the country, meaning a chance of a frosty morning on Sunday. The north will remain at around two degrees.

“The gale force winds are bringing winter to Germany,” said Herold. Adding, “the snowline will soon be dropping to between 300 and 400 metres above sea level.”