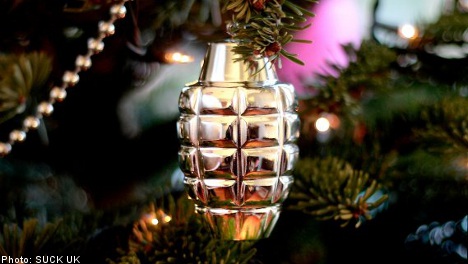 “Quite simply I think it’s distasteful, especially if they are raising money for charity. This is a museum frequented by children and it’s hard to explain to them why there are hand grenades in the Christmas trees,” visitor Elinor Lindeborg told Sveriges Television (SVT).

“This is an Army Museum, but should still try to highlight a non-war perspective.”

Lindeborg and others have reacted to the Stockholm-based Army Museum’s efforts to raise money for anti-poverty and disaster relief charity Christian Aid by selling Christmas tree orbs that look like hand grenades.

“Support Christian Aid and their work for peace and against poverty by buying our Christmas ornaments which are a subtle reminder of those who are less fortunate than we are during the holiday season,” the museum says on its website in promoting the initiative.

“How in Lord’s name can they come up with such an idiotic idea to make Christmas tree balls shaped like hand grenades? Sick! Shameful,” another upset woman told Sveriges Radio programme Ring P1.

Despite the criticism, the museum said it has no plans to pull the hand grenade ornaments.

“I can understand that people react, especially if they has been in a war situations themselves, but we’ve chosen to focus on seeing that proceeds go to a charitable cause,” the museum’s division head Helena Martinsson told the Expressen newspaper.

She added that response has been positive for the most part.

“Having a decoration like this on the tree can get people to reflect on how good we have it here in Sweden and that there are people who have it much worse,” said Martinsson.

“It could be the topic of an interesting conversation over Christmas.”