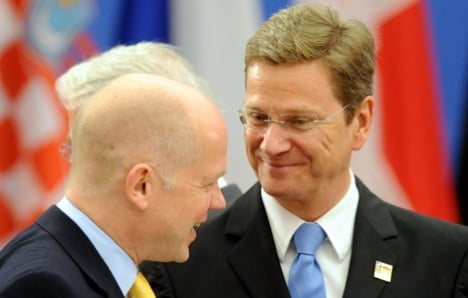 Speaking at a meeting with his Portuguese counterpart in Lisbon on Friday, Westerwelle said it was “regrettable that not everyone is joining in” with the plan outlined by German Chancellor Angela Merkel and French President Nicolas Sarkozy on Thursday night.

Merkel and Sarkozy had proposed that all 27 EU states agree to a fundamental treaty change to impose a debt limit and automatic sanctions if countries live too far beyond their means.

British Prime Minister David Cameron dramatically wielded his veto at the meeting in Brussels, meaning that a separate fiscal union was proposed, and is expected to be signed by the majority of EU states in March.

So far, 23 states have said they will sign up to Merkel and Sarkozy’s plan, with Sweden, the Czech Republic and Hungary saying that they would have to consult their parliaments. Only Britain has categorically ruled out joining, unless special exemptions are made to protect the financial sector.

“We will not leave anything untried to get all the countries in the European Union to join this important stability package,” said Westerwelle. “The work of persuasion will continue.”

Westerwelle welcomed the new fiscal union. “This is a historical step towards a stability union,” he said in Lisbon. “But there is still a lot to do. We have no time to lose.”