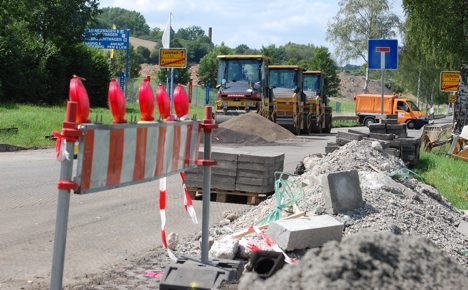 According to the survey conducted by the research institute YouGov, 59 percent of Germans said that the state of the country’s inner city roads was the most pressing transport issue, while more than half also thought the maintenance of country roads and motorways should take top priority.

Only 22 percent considered a speed limit for Germany’s motorways as important, while only 15 percent thought there needed to be more high-speed intercity rail links.

The people asked also raged against “sleeping” road works – 48 percent said they got most worked up over road construction sites where apparently nothing was going on.

The survey also found that 78 percent of the population had never heard of the Transport Ministry’s new website, bmvbs.de/baustellenmelder, where citizens can reports such inefficient road works.

A spokesman for the ministry said that the website, which went live in October, had so far received 1,200 such reports, many related to the same road works. “The top of the list is North Rhine-Westphalia, where about 40 percent of the reports have come from,” he said.

The federal ministry has now started to ask the states in question to explain the delays. “As far as the federal government is concerned, there is most room for improvement in road work preparation and in the contractual guarantees of short construction periods,” the spokesman said.

YouGov surveyed more than a thousand Germans over 16 for the survey at the end of last month.