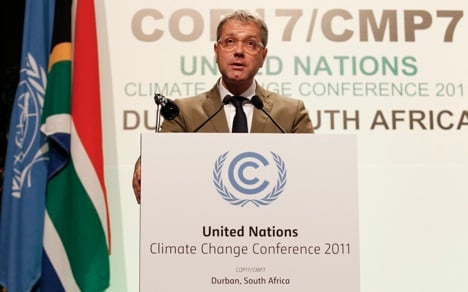 “We are now in an extremely critical situation because of time,” German Environment Minister Norbert Röttgen told journalists after all-night wrangling.

“The delay is very critical. … It is very doubtful whether we will succeed.”

Separately, French Environment Minister Nathalie Kosciusko-Morizet said the extremely slow pace of negotiations under South African chairmanship made the odds of a deal on Saturday ever slimmer.

The marathon talks had been due to end on Friday but ran on for a 13th day with no sign of a breakthrough on a package which is enmeshed in a web of connected issues.

On the table is a proposal for a new pact on greenhouse gas emissions that for the first time would bring all countries under one legally binding roof.

Both Röttgen and Kosciusko-Morizet criticised South Africa’s slow method of consensus-building and the fact that key draft documents, essential for decision-making, had still not appeared.

“We are in the worst situation, that of failure because of time management,” Kosciusko-Morizet said.

“We are risking failure because of a lack of negotiations, a lack of confrontation,” she said. “Last night, the (conference) chair did not even seem to take the problem of time into account.”