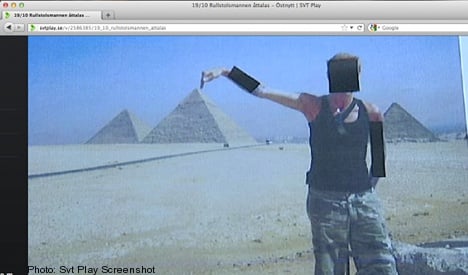 The three family members he claimed to be his around-the-clock personal care assistants were also sentenced to between one and two years in prison.

The 47-year-old man was convicted for aggravated fraud and benefits crimes and will also be forced to pay back just over 13.5 million kronor, local media reports.

After a car accident in 2001 the man claimed, supported by a doctor’s note, that his injuries were so bad he needed personal assistants.

For six years his two brothers and his girlfriend assisted the man and meanwhile collected millions of kronor for their work.

The doctor who was on trial for writing the note was however acquitted by the Linköping district court.

The 47-year-old, dubbed the “wheelchair man” (rullstolsmannen) by the Swedish media, resides in Östergötland, but spent his summers on the Baltic island of Gotland, as well as in California.

Following his car accident he claimed to be in such bad condition that he couldn’t even dress himself, but his fraud came to an end when suspicions were raised at the insurance agency and police managed to film the man while gardening with full mobility by his house on Gotland.

“This has given us both the strength and force to go after these people,” said Svante Borg and the insurance agency to news agency TT, about the verdict.

Several other cases of benefits crime have since been revealed. A verdict is expected in a case in Malmö on December 15th, and in Halmstad in western Sweden a similar case is also in process.

The insurance agency has increased its ability to digitally trace possibly criminal connections between those receiving assistance, and companies supplying it, as well as the assistants themselves. The cooperation with both police and prosecutors has also increased.

“It has given us a better opportunity to follow the trace all the way to the end,” Borg said.

Each year about 23 billon kronor is paid in compensation for assistance in Sweden, and those receiving assistance are often completely unaware that cheating and fraud is going on behind their backs.

“It is a business that handles large sums of money, and it is a very vulnerable group of citizens, which poses a risk to attract the bad guys,” Borg said.

The insurance agency roughly estimates that approximately one billion kronor in benefits for personal care assistants are wrongfully claimed each year.