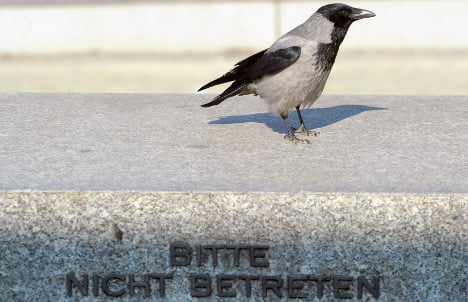 The Hauptbahnhof terminus was opened five years ago, with a curving roof covering less of the platform than the architect had intended – and now the roof that is there is leaking.

Manager of the Berlin bird protection group Nabu, Anja Sorges, told The Local crows had been picking out the sealant.

“They seem to have found a great toy up there. You can see them from underneath. Crows love playing with things – they are very intelligent birds and it seems they have found lots to play with on the roof.

“I reckon the sealant has turned porous with age, and become easy for the crows to pull out.”

She said it would not be fair to blame the damage on the crows. “It is not their fault, it must be something to do with the material ageing, as it was not leaking, or attractive to crows when it was first built.”

She said there was no point in the Bahn trying to scare off the birds. “That never works, they are too intelligent to be scared off for long – they soon realise that measures to scare them do not actually pose a threat and ignore it.”

A spokesman for Deutsche Bahn told The Local that he knew the crows were at least partly responsible for the damaged roof. “Repairs need dry weather and a certain temperature, so it will probably not be possible to undertake them until the spring,” he said.

There would be no attempt to keep the birds away. “It is not as if we can cover the whole station with bird netting,” he said, admitting that the roof would probably still offer up a crows treat in the future.