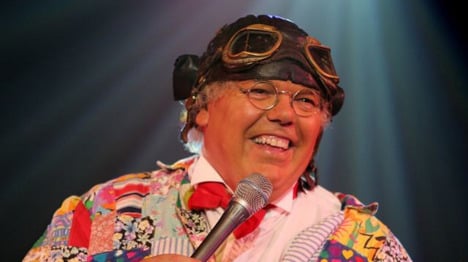 Of all the places one would expect a performer dubbed “the most sexist, racist comedian in the UK” to visit, Sweden is probably the last.

But ruffling feathers is something that comes as almost second nature to Roy ‘Chubby’ Brown and the odd threat of violence or censure from a politically correct media in Sweden is hardly likely to cause him much lost sleep before his upcoming shows in Gothenburg and Stockholm.

That said, Brown is well aware of the potential storm his visit may cause.

”I’ve never performed in Sweden before, so I really don’t know what it will be like,” Brown tells The Local.

”I hope they like the show, but I realize they may hate me. My show is not for everyone I know. I am talking to the brickie, the builder, the man in the street, and I just see it as my job to try to make people laugh, I don’t go out of my way to offend people.”

Given that the comedian has made a career out of being offensive, some may consider his defence of his act as crass at best, but there is no doubting Brown’s popularity at home.

Despite being considered too blue for TV, he has sold millions of tickets and DVDs over the years, and performs in front of more than 350,000 people each year, with an act that is either edgy and close to the bone or gratuitously offensive, depending on one’s point of view.

In Swedish comedy circles, Brown’s visit comes as something as a shock.

“I was very surprised to hear he was coming here. This is a country that embraces Eddie Izzard, Jeff Dunham and Gabriel Inglesias, all of whom do what could call softer, more intelligent comedy,” Peter Von Satzger, head of Sweden’s Comedy Central TV channel, tells The Local.

“But then again, we live in a country where [rockability performer] Eddie Meduza once had huge success and the Sweden Democrats make it in to parliament – so who knows, it may work.”

Apologists and fans, like Brown, take the argument along the lines of, ‘you know what to expect from my humour. If you are likely to be offended, don’t watch or come along.’

But that doesn’t detract from the fact that he is taking his very British show to Scandinavia and although one might expect a bullish attitude from such a character, he seems genuinely concerned about the reaction he may receive.

Most of his foreign forays in the past have been either to former colonies like Australia (“I thought I was coarse until I met the Aussies,” he says) or places with large expat populations.

Whether his shows in Sweden will attract such an audience and Brown finds himself preaching to the converted, remains to be seen, but early signs are that Swedes will turn up, if only out of curiosity.

“We had a popular comedian a bit like Brown in the 80s,” says Von Satzger, referring to Meduza, who wrote songs with obscene lyrics and also performed under an alter ego known as ‘E. Hitler’.

“But over time, our culture developed to become more tolerant. To make crude remarks about homosexuality or race is not going to go over at all. Humour is a great tool to desensitize tough subjects and laughter can often relieve such sensitive social issues, but it has to be done with finesse.”

Von Satzger believes that Brown’s brand of humour is someone outdated for Swedish audiences.

“Roy Chubby Brown is, in my eyes, a dinosaur,” he says.

2The new generation will not tolerate anything that is touching on plain racism – they will tolerate jokes on the race and homosexuality, but much of Browns delivery is just statements, not jokes and that will die a death.”

In person, Brown is as unlike his onstage persona as it is possible to be. Slightly shy and retiring, he abhors bad language in general and bans any form of what he calls ”mucky jokes” at home with his wife and children.

His act though is another matter.

“I do have limits. I will never make jokes about paedophiles or people harming children” says Brown, but almost nothing else is considered beyond the pale once he is onstage in his trademark patchwork shirt and goggles.

In the UK, Ricky Gervais has once again fuelled the debate over comedy and bad taste, with a new series about dwarfs, arguing that his intention is to push barriers.

Whether a Swedish audience will appreciate Brown’s act, at a time when nationalism and racial intolerance are hotter topics than ever, remains an open question.

Von Satzger buys the argument that comedy is supposed to be confrontational but remains unsure of what sort of reception Chubby Brown will get in Sweden.

“You can get away with a lot wearing a comedy shield. In a way comedy gives you an opportunity to de-dramatize subjects, but it has to be clever,” he explains.

According to Von Satzger, “Swedes can take vulgarity”, citing the popularity of US comedians Eddie Murphy and the late Patrice O’Neal in Sweden, who “do sexist jokes in a clever way”.

“But Chubby Brown is more like a Benny Hill character and Swedes are usually more intelligent than to laugh at that,” he says.

Editor’s Note: Shortly after this article’s publication, The Local learned that both of Roy Chubby Brown’s shows in Sweden have been cancelled. We are currently looking into the reason for the cancellations and will update the story when more information becomes available.