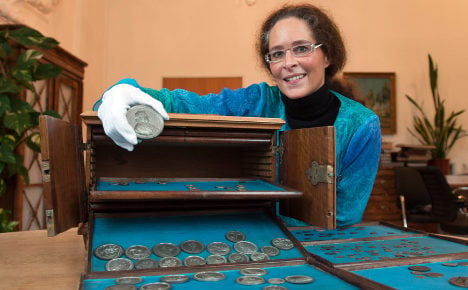 Tanja Höls and the coins she found. Photo: DPA

Tanja Höls told The Local she was doing her normal rounds of storerooms in the Passau state library in Bavaria when she decided to open up the inlaid wooden box and see what was inside.

“The box itself was fairly unspectacular, it looked like a big jewellery box, with lots of little drawers inside,” she said.

Höls, whose duties include basics such as making sure the library’s electricity supply works and the rubbish is collected regularly, was often in the store rooms to return books which had been loaned, to their storage places.

“I thought my boss Dr Wennerhold might be interested to know what I had found in the box,” she said.

He was more than interested – Markus Wennerhold, head of the library, told The Local he was delighted.

“There are coins there from ancient Rome and Greece, as well as from the Byzantine era, as well as medals from the baroque period and Napoleonic times.”

The coins – silver, bronze and brass – were worth millions, he said. “We looked for similar ones online, and found that some which were the same but in much worse condition had been sold for considerable sums. Then there were coins that we have that are not recorded elsewhere.”

He said the coins had simply been forgotten about. “No-one currently working at the museum knew they were there,” he said.

“They were hidden in 1803 during the secularisation in Germany, when all books and coins were taken from the monasteries and cloisters and put in state hands. The most valuable things were supposed to be taken to Munich, according to the archives, but someone here in Passau decided to keep some of them here and hid some treasures – including these coins.”

Wennerhold said they had been in the wooden box in the storeroom ever since, simply overseen for two centuries.

“Next year we have our 400th anniversary and plan a new exhibition to mark that date – these coins will go on display for the first time. It fits perfectly,” he said.