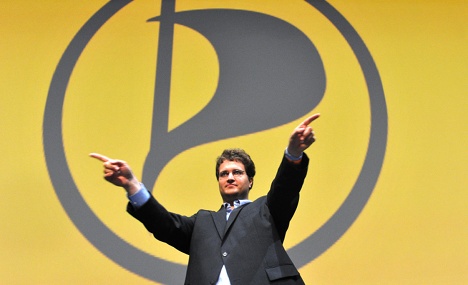 While that would still be enough for the Pirates to clear the five-percent hurdle to send MPs to enter the Bundestag, it is a major fall from October when they attracted the support of nine percent of voters.

The previous month, they won 15 seats in the Berlin legislature for the first time, gaining just under 9 percent of the vote.

Reacting to the figures collected for news magazine Stern and broadcaster RTL, party spokesman Christopher Lang told The Local on Wednesday that a drop would be expected because the visibility of the Pirates had dropped in recent months.

“In October you were coming off the big vote in Berlin; since then we haven’t been in the media as much,” Lang said. “Even now we would be voted into the Bundestag and that is phenomenal for a party new to the scene. We have to see how much the numbers drop.”

But other factors could be affecting the party’s support, including a series of minor scandals – two minor party leaders were revealed in October to have been former members of the neo-Nazi National Democratic Party. And last month the Pirates admitted they were trying to work out how to deal with Scientologists who were trying to join the party.

There have also been persistent questions surrounding the Pirates’ political positions – they are viewed by some as a group of techies interested in little more than internet freedom.

Last weekend the Pirates attempted to head off some of that criticism by formulating a range basic social and economic policies during a party conference – although their national chairman also asked them to stop arguing publicly over internet social networks.