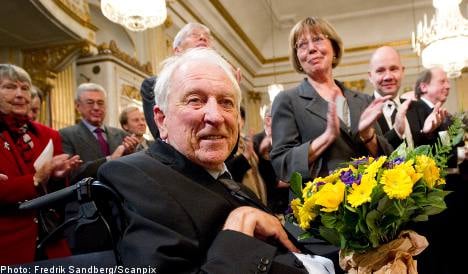 Tranströmer is the first Swede in 40 years to win the Nobel literature prize.

Whereas many literature laureates prepare special lectures for the occasion, Tranströmer’s lecture featured readings of 13 poems from throughout his career coordinated with musical accompaniment.

Tranströmer looked on as his work was set to music and sung by the Gustaf Sjöqvist’s Chamber Choir and Uppsala Chamber Soloists, among other performers.

“Good poetry is a powerful thing. It can change our picture of the world, making it clearer, sharper, more comprehensible. And forever,” Englund said.

“We should not be taken in by the understated tone of Tomas Tranströmer’s poetry. Several of the real wonders of our existence are constantly present: Memory, History, Death, Nature – nature not least. But each not as an overwhelming exterior presence, nor as something that assumes life under our gaze. In your work it is the very opposite: ego, the individual, is the prism into which everything is drawn. It gives us a feeling of context, even obligation,” he continued.

“Dear Tomas, it is impossible to feel insignificant after having read your poetry. Neither is it still possible to love the world for the wrong reasons.”

“But what makes great poetry great is not only that it clarifies or reveals something already present in our world, but also that it has the ability to actually widen the boundaries of that world. Therein lies its power,” Englund said.

The first poem recited was “Minnena ser mig” (Memories Look at Me), originally published in 1983:

A June morning, too soon to wake,

too late to fall asleep again.

I must go out – the greenery is dense

They can’t be seen, they merge completely with

They are so close that I can hear them breathe

although the birdsong here is deafening.

Tranströmer began his serious writing career in 1954 when he published “17 dikter” (17 poems).

With “Windows & Stones: Selected Poems”, published in English in 1972, he consolidated his standing among critics and other readers as one of the leading poets of his generation, according to his Swedish Academy biography.

A significant amount of his work has been translated into English and other languages including “The Sorrow Gondola” and “New Collected Poems”, published in 2010 and 2011 respectively.

In an article on the challenges of translating Tranströmer into English, Robbin Robertson, who translated Tranströmer’s forthcoming volume, “The Deleted World”, wrote: “The supple rhythms of the original poems are hard to replicate and, equally, the plosive musicality of Swedish words like ‘domkyrkoklocklang’ lose all their aural resonance when they become a ‘peal of cathedral bells.’”

After Tranströmer was announced as the Nobel literature winner at the beginning of October, his books flew off the shelves in the Anglophone world.

The Observer reported that within a few days after the announcement, his book The Great Enigma: New Collected Poems was ranked number 12 on Amazon, a rarity for a poetry book.

Tranströmer is the first Swedish writer since Eyvind Johnson and Harry Martinson, who shared the prize in 1974, to claim the Nobel.

The Literature Nobel has been awarded 104 times since 1901, with the exception of six years during WWI and WWII.

He will receive the 2011 Nobel Prize in Literature on Saturday at the Stockholm Concert Hall.

A live webcast of the Nobel literature lecture was broadcast from the Swedish Academy. A video of the performance will be available on the Nobel Foundation website below, where the full text of the 13 poems in English and Swedish have also been published.

Thomas Perlmann (right), the Secretary of the Nobel Committee, stands next to a screen showing David Julius (L) and Ardem Patapoutian, winners of the 2021 Nobel Prize for Medicine. Photo: Jonathan Nackstrand/AFP

“The groundbreaking discoveries… by this year’s Nobel Prize laureates have allowed us to understand how heat, cold and mechanical force can initiate the nerve impulses that allow us to perceive and adapt to the world,” the Nobel jury said.

The pair’s research is being used to develop treatments for a wide range of diseases and conditions, including chronic pain. Julius, who in 2019 won the $3-million Breakthrough Prize in life sciences, said he was stunned to receive the call from the Nobel committee early Monday.

“One never really expects that to happen …I thought it was a prank,” he told Swedish Radio.

The Nobel Foundation meanwhile posted a picture of Patapoutian next to his son Luca after hearing the happy news.

Our ability to sense heat, cold and touch is essential for survival, the Nobel Committee explained, and underpins our interaction with the world around us.

“In our daily lives we take these sensations for granted, but how are nerve impulses initiated so that temperature and pressure can be perceived? This question has been solved by this year’s Nobel Prize laureates.”

Prior to their discoveries, “our understanding of how the nervous system senses and interprets our environment still contained a fundamental unsolved question: how are temperature and mechanical stimuli converted into electrical impulses in the nervous system.”

Julius, 65, was recognised for his research using capsaicin — a compound from chili peppers that induces a burning sensation — to identify which nerve sensors in the skin respond to heat.

He told Scientific American in 2019 that he got the idea to study chili peppers after a visit to the grocery store.  “I was looking at these shelves and shelves of basically chili peppers and extracts (hot sauce) and thinking, ‘This is such an important and such a fun problem to look at. I’ve really got to get serious about this’,” he said.

Patapoutian’s pioneering discovery was identifying the class of nerve sensors that respond to touch.

Julius, a professor at the University of California in San Francisco and the 12-year-younger Patapoutian, a professor at Scripps Research in California, will share the Nobel Prize cheque for 10 million Swedish kronor ($1.1 million, one million euros).

The pair were not among the frontrunners mentioned in the speculation ahead of the announcement.

Pioneers of messenger RNA (mRNA) technology, which paved the way for mRNA Covid vaccines, and immune system researchers had been widely tipped as favourites.

While the 2020 award was handed out in the midst of the pandemic, this is the first time the entire selection process has taken place under the shadow of Covid-19.

Last year, the award went to three virologists for the discovery of the Hepatitis C virus.

The Nobel season continues on Tuesday with the award for physics and Wednesday with chemistry, followed by the much-anticipated prizes for literature on Thursday and peace on Friday before the economics prize winds things up on Monday, October 11.

For the Peace Prize on Friday, media watchdogs such as Reporters Without Borders and the Committee to Protect Journalists have been mentioned as possible winners, as has the Belarusian opposition spearheaded by Svetlana Tikhanovskaya. Also mentioned are climate campaigners such as Sweden’s Greta Thunberg and her Fridays for Future movement.

Meanwhile, for the Literature Prize on Thursday, Stockholm’s literary circles have been buzzing with the names of dozens of usual suspects.

While the names of the Nobel laureates are kept secret until the last minute, the Nobel Foundation has already announced that the glittering prize ceremony and banquet held in Stockholm in December for the science and literature laureates will not happen this year due to the pandemic.

Like last year, laureates will receive their awards in their home countries. A decision has yet to be made about the lavish Peace Prize ceremony held in Oslo on the same day.