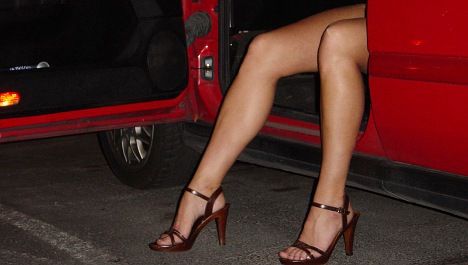 The move comes despite France’s long history of liberal attitudes toward sex and with the country gripped by coverage of a prostitution scandal involving former IMF chief Dominique Strauss-Kahn, who has been linked with a pimping ring operating out of luxury hotels in the northern city of Lille.

The non-binding resolution on the “abolition of prostitution”, drafted by a cross-party commission, was approved in a show of hands vote in the lower house National Assembly.

Lawmakers from the commission were expected to introduce a bill later on Tuesday or in the next few days to criminalise paying for sex.

The commission has recommended imposing sentences of up to six months in prison and a €3,000 ($4,000) fine on clients of prostitutes.

The resolution said France should seek “a society without prostitution” and that sex work “should in no case be designated as a professional activity”.

Guy Geoffroy of the ruling UMP party, a member of the commission, said earlier that passing the resolution would be “an important, symbolic and solemn step” in fighting prostitution.

“Nine prostitutes out of ten are victims of human trafficking,” he said.

Prostitution is not illegal in France though several linked activities are, including soliciting, procuring and operating a brothel, while paying for sex with someone under the age of 18 is banned.

Yves Charpenel, the head of the Fondation Scelles, a group that fights human trafficking and is among those demanding criminalisation, said it was unclear whether the bill on criminalisation would eventually be adopted.

“There is no consensus yet on this subject,” Charpenel said. “Will the deputies who vote for the abolitionist resolution then vote for its concrete application?”

“More than ever, it is necessary to clarify the French position” on prostitution, he said.

Sex workers’ groups have denounced the proposal as an attack on their rights and protested against the resolution near the National Assembly on Tuesday.

Punishing clients will “deprive prostitutes of work that provides them with a living, give clients more power over them and push prostitutes to turn to intermediaries to be able to work,” said Sarah-Marie Maffesoli, a lawyer for sex workers’ group Strass.

In a letter to lawmakers, the group called for the resolution to be voted down, saying it threatens sex workers’ “health, security and livelihoods”.

An estimated 20,000 people work as prostitutes in France.

Prostitution has been thrown into the spotlight in France in recent weeks as media devoted widespread coverage to the case of eight leading members of Lille society charged with operating a ring that provided sex workers to clients including, allegedly, Strauss-Kahn.

The one-time top contender for the French presidency resigned as International Monetary Fund chief in May after he was accused of attempting to rape a New York hotel maid, though the charges against him were later dropped.

He denies any criminal wrongdoing.