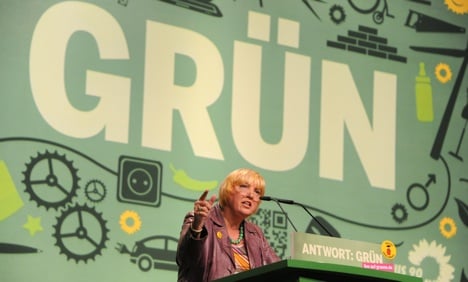 Party members noted that outlawing the NPD “is not a cure for far-right ideology.” What’s needed is an overall strategy “against racism, inhuman behavior and far-right violence.”

A 2003 effort at banning the NPD failed when three out of seven judges on Germany’s Constitutional Court ruled that because the federal government had used paid informers, they couldn’t be sure if materials in violation of the constitution came from party members themselves, or were planted by the government snitches.

Winfried Hassemer, the head of the court at the time, told the Frankfurter Rundschau, in an article published Saturday, that a ban needs to be reconsidered, but eliminating the party won’t change the current situation Germany finds itself in. Many critics, both at home and abroad, wonder why investigators have only now arrested some suspects in a series of killings of foreign-born business people that started in 2000.

In other party conference news, the Greens called for higher taxes for the wealthy and also advocated for so-called “German Bonds”. These would be a lending instrument used by both the federal and state governments and would allow state governments to get the advantageous interest rates enjoyed by federal borrowing. Currently states pay more for their loans than the federal government does.

A similar mechanism, known as “eurobonds” is being discussed across Europe, though German Chancellor Angela Merkel, from the conservative CDU party, is strictly opposed to these.