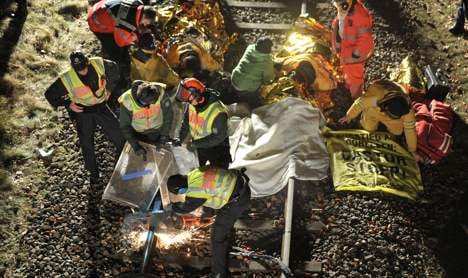 Among their tasks was the removal of a small pyramid, which four protestors allied to a farmers’ group chained themselves to. Reporters on the scene said police had brought in tools and were starting to dismantle the pyramid around 9:30 am.

The police moved in overnight to the tracks around the town of Harlingen, telling several thousand protestors gathered there to clear out, according to reporters at the scene.

Two hours later, with most demonstrators remaining where they were, the police began to remove them one by one. No violence was reported.

Police also removed eight activists from the Greenpeace environmental group, who had chained themselves to the train tracks near the nearby town of Luneburg.

Harlingen lies some 20 kilometres (12 miles) from the train’s final destination of Dannenburg where the 11 containers of German nuclear waste reprocessed in France are due to be unloaded onto trucks.

Organisers said about 23,000 protestors had gathered in Dannenburg, while police put the number at 8,000. The train was expected to arrive at Dannenberg in broad daylight, for security reasons, on Sunday at the earliest.

From Dannenburg, the waste will be transported by heavy goods trucks the final 20 kilometres to the Gorleben facility, where it will be stored.

In the wake of March’s nuclear disaster in Fukushima, Japan, the German government has decided to phase out its use of nuclear power by 2022, and thus bring to an end the controversial practice of sending radioactive waste overland to France for reprocessing.

“It’s like a friend telling you that he will stop smoking in ten years,” said Jochen Stay, spokesman for the anti-nuclear body Ausgestrahlt (Radiated). “You are not going to congratulate them just yet.”

This is expected to be the last such shipment from France. But from 2014, nuclear waste will be transported to Germany for storage from a British processing plant at Sellafield.