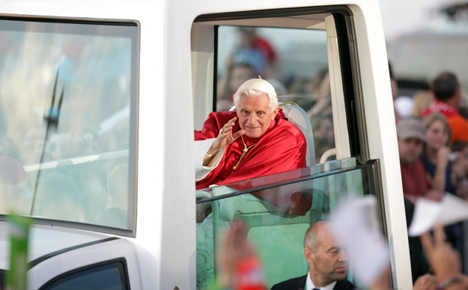 Johannes Christian Sundermann, a lawyer from Unna in North Rhine Westphalia, filed a legal complaint against the German-born pope formerly known as Joseph Ratzinger for not wearing his seat belt on several occasions “for more than one hour at a time,” according to a report in the Westfälischen Rundschau newspaper.

The pope allegedly broke the law during his visit to Freiburg at the end of September as part of his tour of Germany.

Sundermann represents a Dortmund man. As evidence the two are offering YouTube videos and are also calling the Archbishop of Freiburg, the chairman of Germany’s Bishops Conference and Winfried Kretschmann, the Green Party politician who heads the state government in Baden-Württemberg.

The lawyer, a member of the socialist Left party, took on the case after several other attorneys rejected it. Both Sundermann and his client are no longer members of the Catholic Church.

In a worst-case scenario the pope would have to pay a fine of between €30 and €2,500. However, if the pope enjoys diplomatic immunity, even a miracle won’t help this case.