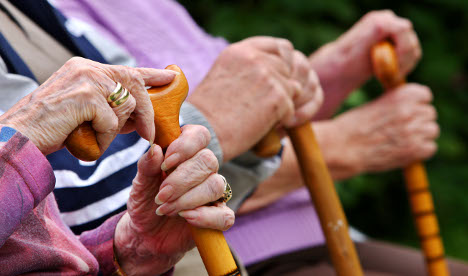 Discussing how you will support yourself financially in the grey years of retirement may not be the most enthralling topic of conversation at a dinner party, but private pensions saving is becoming increasingly important.

German residents are having to take a much more proactive approach to pensions savings, as the role of the state in funding retirement plans recedes.

This is in part a response to the ageing demographics of the country. Germany has one of the lowest birth rates in Europe, with the proportion of its population aged over 65 set to almost double to 30 percent by 2035. As a consequence, the retirement age in Germany is being raised from 63 to 67, in a phased process from 2012 to 2029.

A recent important trend in the pensions landscape in Germany is a migration from defined benefits schemes, where a pension is determined by a set formula rather than investment returns, to defined contribution schemes, where responsibility for ensuring an adequate retirement shifts to individuals having their income directly linked to investment returns.

“The government is providing incentives to these schemes in the form of early retirement options and so-called ‘flex-time’ models offering the employee the option to save parts of his or her bonus or part of his or her base salary, left over vacation days, stuff like that. Invest that and use it for early retirement.”

Employees in Germany have the option of saving for a pension in an occupational scheme, which is organised by a company and financed by its employees. The maximum annual contribution members of such schemes can make is €2,640 (set to be increased to €2,688 in 2012).

Alternatively, pension savers can pay contributions into a private scheme, which falls under the so-called Riester- Rente legislation, and requires employees to make pension contributions from their net income. Additional state top-ups are available to members of such schemes, depending upon factors such as the number of children they have.

The newer Rürup-Rente scheme is another option available to everyone, though for tax reasons it is primarily taken out by the self-employed. Members of a Rürup-Rente scheme can pay into the plan a maximum of €20,000 per year if they are single or €40,000 per year if they are married. In 2011, members could write off 72 percent of their annual contribution against their income. This percentage amount then increases by two percentage points each year until reaching 100 percent.

“The most efficient way to save for a pension is with an occupational corporate scheme. This is because some unions will have negotiated in a collective bargaining arrangement which provides members with an extra top-up,” said Martin Katheder, director, head of pensions markets at Allianz Global Investors in Munich.

He gave the example of an occupational scheme member paying €100 into their pension pot each month. “In the metals and electronics industry, he or she will have the right to apply for an additional annual employer contribution of €320, which will equate to an annual pension contribution of €1,520. In addition, scheme members can obtain an approximately €600 tax and social security tax break for the €1,200 paid into the scheme each year,” he said.

“My advice to people is that they should check if they have used up all the tax incentives for saving for a pension which are available to them from the state,” said Katheder.

Meanwhile, the current low interest rate environment in the eurozone has resulted in the Finance Ministry in Germany in February 2011 decreasing the life insurance guaranteed interest rate (GIR) – the maximum interest rate insurers are allowed to promise as legally binding while selling their policies – from 2.25 percent to 1.75 percent.

Dr. Sabine Horstmann, a project manager at the GVG group in Cologne, which represents stakeholders including bodies from the insurance sector and health service on social policy issues, said this reduction in the interest rate has become a contentious issue in Germany. “A lower GIR makes life insurance and pension policies less attractive for consumers. The New GIR will be effective from January 2012 onwards.

Going by the bulky moniker the Familienpflegezeitgesetz, new legislation coming into force January 2012 will provide the voluntary option of providing employees with the choice of reducing their working hours to organise the long-term care of an elderly family members. “The legislation will allow employees to have a reduced working week of 15 hours, while still obtaining half of their salary. This will be compensated by a lower salary when they return to full-time work,” said Horstmann.

But the German pension industry is still in the process of creating offerings that meet the requirements of the Familienpflegezeitgesetz rules, as well as the growth of defined contribution schemes which have compulsory long-term care insurance components.