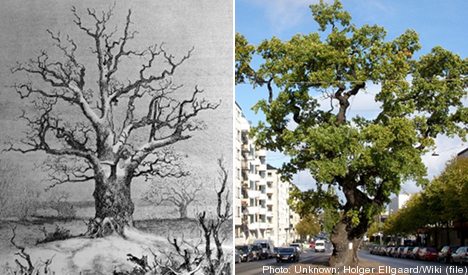 But despite around the clock watch, the “TV-eken” oak tree, eventually had to go, to protesters’ wild despair.

The “TV oak”, also known as the “Radio oak” was among the oldest oak trees in Sweden’s lush capital, and also among the top 100 in girth, measuring 5.8 metres around the trunk, according to the tree’s extensive Wikipedia entry.

An illustration from the 1850s shows the already massive tree before its surroundings were urbanized.

In the 1960s, the oak was preserved thanks to a comprehensive project to widen the nearby Oxenstiernas street, and it was placed in a central divider between the two lanes.

The ground was also raised, and the tree trunk was embedded into a gravel filled “well” as support.

The debate about the old tree’s fate flared up again on October 24th, 2011, when a first attempt to fell it was made.

The Traffic Administration Office (Trafikkontoret) in Stockholm had deemed the oak a traffic hazard due to its proximity to the street.

But plans were cut short, as tree huggers had gathered the night before and made the operation impossible.

Since then, the tree has received 24/7 protection from a large number of enthusiastic friends of nature who camped out, both on the ground and in the tree’s wide spread crown for a month.

On November 23rd, a mysterious man dropped all his clothes and climbed the tree in the nude, only to then mysteriously disappear.

All of this attention, naked and clad, bought the protesters enough time to allow for several additional reviews of whether or not the tree had to go.

Neutral arborists from around the country travelled to the capital to perform ultrasound examinations of the debated tree to determine whether it could stand on its own or not.

Some found it could, but the Traffic Administration Office stood by its initial decision.

The efforts and determination of the dedicated few wasn’t enough, however, and during the cold and early morning of November 25th, police seized the area to escort about 40 outraged protesters outside the perimeter.

Then the saws were taken out. After about an hour, the operation was completed.

Where the massive oak, which might well have witnessed the founding of Sweden once stood, only a large stump surrounded by gravel remains.