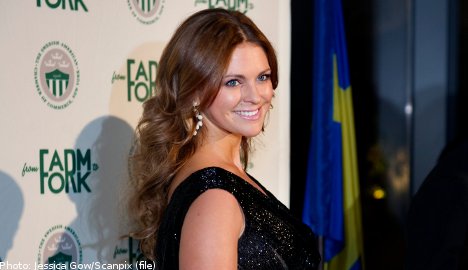 ”She has been working for some time in the US and has been invited to take part in an event there on the Nobel day,” the Royal Court’s press officer Bertil Ternert told daily Aftonbladet.

The Swedish Royal Family are traditionally staple attendees at the annual white-tie Nobel awards ceremony held in Stockholm’s Concert House, as well as the lavish dinner that follows at the Swedish capital’s City Hall.

This year, the awards ceremonly will be attended by the Swedish King and Queen as well as Crown princess Victoria and Prince Daniel.

However, the entire Royal family will be in attendance at the post-award banquet later in the day. All but Princess Madeleine.

The non-attendance by the fashion savvy princess, generally regarded as the best dressed at the event, will come as a disappointment to many Swedes watching the show on TV.

”But I am sure her presence will be appreciated in the US,” Ternert told Aftonbladet.

The event the Princess is chosing before the Nobel festivities is a celebration to commemorate women in science through the years.

This year marks the 100-year anniversay since Marie Curie received her second Nobel prize, a fact which will be celebrated at the event Princess Madeleine will be attending in New York.

”This is being celebrated in the US due to the clash with this year’s Nobel ceremony in Sweden,” said Ternert to the paper.