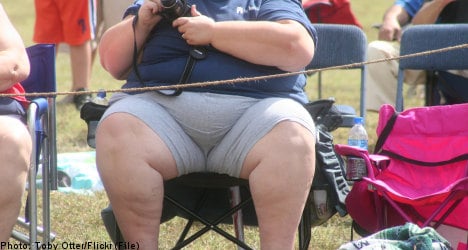 Obesity is a growing problem in Sweden as in many other countries, with the number of obese people rising from 6 percent to 11 percent over the last two decades, a development which is mirrored in many OECD countries, according to a new report from the organization.

Recent figures show that Sweden is one of the OECD countries with the lowest share of obese people at 11 percent of the population, whereas the US has the largest share with 34 percent.

Japan has one of the lowest shares of obese people with 4 percent.

However, the report also shows that in Sweden, women with low-levels of education are more than twice as likely as more educated women to be over weight.

For men, the gap is less obvious but is still more pronounced than in most OECD countries, according to the report.

The OECD warned that obesity is a major health issue and overweight people are at risk to be struck by serious diseases due to their weight.

Severely obese people die on average ten years prior to those of normal weight, the report shows.

Almost half of the OECD countries are overweight, according to the new figures, and poor people are more likely to be overweight than the more well off part of a population.

Many countries are trying to combat overweight and obesity by raising taxes on fat or sugar, for example Denmark, Finland, France and Hungary.

According to the OECD report, health campaigns, state regulation and more support from physicians could prevent hundreds of thousands of deaths every year.

Obesity among children is another problem, and Greece tops the list there, followed by the US and Italy.

In Sweden the share of obese children is the largest in Scandinavia, with 19.5 percent of girls and 17 percent of boys overweight, compared to Denmark’s 15.2 and 14.1 percent and Norway’s 14.7 and 12.0 percent.

In China, child obesity is at the lowest, with only 4.5 percent of the girls and 5.9 percent of the boys overweight or obese, according to OECD statistics.