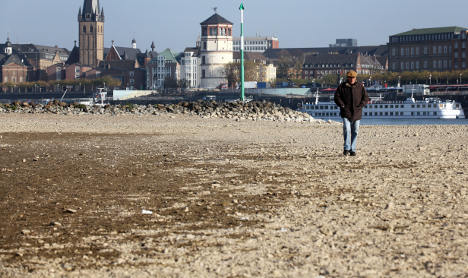 The current water level of the Rhine is averaging 1.5 metres below average. And in Kaub, Rhineland-Palatinate, the river is flowing at a depth of a mere 56 centimetres, the lowest it has been all year.

Ralf Schäfer of the Waterways and Shipping Office for Bingen confirmed that this already low level is predicted to drop another five centimetres by the end of the week.

“It’s too difficult for ships to move in such low waters. Businesses are being damaged, companies are having to load 4,000 tonne capacity ships with a mere 1,000 tons of goods,” Schäfer said.

Many barges along the Rhine are stuck, with some ferry services being cancelled since Saturday.

“You can see every single stone on the riverbed,” said Susanne Maul of the Rhine-based ferry company Rheinfähre Maul.

Across the northeast of the country, the Elbe River, which stretches from Cuxhaven on the North Sea to the Czech Republic, is also suffering from the extreme lack of rain.

In Dresden, where the water level averages 2.4 metres high during the winter months, levels of 84 centimetres were reported on Tuesday. This is just over half a metre above the all time low of 26 centimetres recorded in 1948.

Water levels in neither the Elbe nor the Rhine are predicted to rise unless the country is hit by continuous heavy rainfall, but meteorologists are now predicting the driest November since recording began.

This lengthy dry spell also helped spark a forest fire in Upper Bavaria, which started on Sunday afternoon on the south side of the Schwarzberg mountain, near Lenggries.

The flames soon reached several metres in height and quickly spread over an area of eight hectares, roughly the size of eight football pitches.

No-one was injured, and 150 firefighters along with 30 fire engines were dispatched to the scene.

Their initial efforts failed, however, to bring the inferno under control due to the dark conditions. Four helicopters were sent to dump water on the area which brought the fire under control late on Monday.

Police are using thermal imaging cameras to check for any remaining embers.

The cause of the fire is not yet known, but catastrophe expert Alexander Bauer of the Bad Tölz-Wolfratshausen authorities told public broadcaster Bayerischer Rundfunk the dry weather had aggravated the blaze.