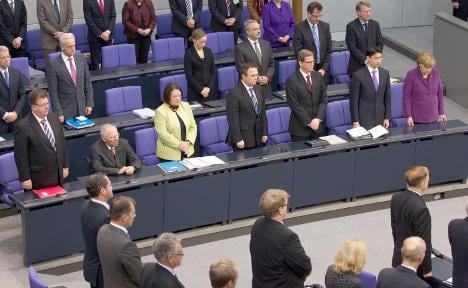 The speaker of the Bundestag lower house, Norbert Lammert, delivered a declaration on behalf of the chamber condemning the 10 murders of victims of mainly Turkish origin and gross errors in the ensuing investigation.

“We are ashamed that our federal and state security services failed to discover or prevent these crimes that were planned and carried out over several years,” Lammert said, as deputies remained standing for the declaration.

He said the Bundestag apologised for the fact “that in some cases victims and their loved ones had suspicion directed against them.”

“We recognise our responsibility,” he said. We must ensure that “the basic rights guaranteed in the constitution apply to everyone living here, regardless of their origin, beliefs or orientation,” he said.

Germans have been shocked at the recent discovery of a small far-right group believed responsible for the unsolved murders of eight men of Turkish origin and a Greek between 2000 and 2006 as well as a German policewoman in 2007.

The killings had long been called the “Döner Murders” because some victims ran kebab snack shops – a term the head of the opposition Social Democrats’ parliamentary group, Frank-Walter Steinmeier, on Tuesday called offensive.

In a chilling video made by the so-called National Socialist Underground, they claimed responsibility for the 10 deaths as well as a 2004 bombing in predominantly Turkish district of Cologne which wounded more than 20 people.

Two of the far-right terror cell were found dead earlier this month in an apparent suicide.

Chancellor Angela Merkel has called the murders a “disgrace for Germany” and urged a fresh drive to ban the neo-Nazi National Democratic Party, the most radical of the country’s far-right political parties.