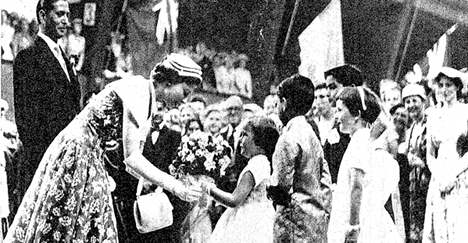 For quite a few years the fifth grade at Stockholm International School (SIS) has held an International Lunch with entertainment provided by the students. This year as SIS is celebrating its 60th year it was decided to have a dinner instead to celebrate this milestone. The entertainment was a nostalgic trip from the fifties through the decades, recalling songs, world events and some school history.

Stockholm International School, or the English School as it was known then, was founded in 1951, by Mrs. Gisela Dietze. The first school was located at Djurgården and by the year’s end it had 58 students, representing fifteen nations. When Mrs. Dietze took the little ones out for a walk, they all held on to a rope so that they could keep together. An article referring to the rope appeared in a Stockholm newspaper. It described ‘A rope of friendship with knots in it is all that is needed to unite the nations to mutual strength and security.’

It is like a mini United Nations and even though the students have very different backgrounds, they play, work and learn together each day.

In 1956 Queen Elizabeth II made a state visit to Sweden and five pupils from the school presented her with a bouquet of flowers.

It was in the 50s that colour televisions became available in the US. And in 1955 Bill Haley’s “Rock Around the Clock” was rocking the world. It was in this decade that DNA, the secret of life was discovered by James Watson and Frances Crick, the Soviet Union launched Sputnik 1 and Edmund Hillary and Sherpa mountaineer Tenzing Norgay became the first climbers known to have reached the summit of Mount Everest.

In Stockholm, Sweden the school was growing steadily. In 1964 the name of the School had changed to the “Anglo-American School of Stockholm” In 1967 it moved to its present location in the center of the city, Johannesgatan 18. The student population then was 288. Like today the students at SIS in those early years had lots of enjoyable activities. There were annual concerts and plays, some of which were performed in French, German, and Latin.

1961 saw the beginning of the construction of the Berlin wall and in 1962 the first computer video game, Spacewar, was invented. The Beatles are probably the most famous rock band ever and were active throughout the 60’s. The mop top hair-style of John, Paul, George and Ringo was seen among boys at the school in the 60’s. The students of the 60s went to the cinema to see films such as Mary Poppins, The Sound of Music or The Jungle Book.

This was the ‘Space Age’ and on July 20th, 1969 Apollo 11, landed on the moon. It was a great honor and an exciting event when John Glenn, a member of NASA’s original astronaut group, visited our school. He was the fifth person in space and was the first American to orbit the Earth, aboard Friendship 7 on February 20th, 1962. If you look carefully when you visit the school and you may see a picture of John Glenn during his visit.

1971 was the year of the first e-mail transmission and Dr. Martin Cooper of Motorola demonstrated the first hand- held mobile phone in 1973. Microwave ovens became commercially available in the 70s and pocket calculators were introduced. Soccer has always been a popular sport in the playground at the school so it must have been very exciting for the students that the 1970 Fifa World Cup became the first world cup to be televised in color. Brazil played against Italy in the final and won 4-1.

A famous Swedish sportsman from this time is Björn Borg who won five Wimbledon singles titles between 1974 and 1981. He is considered by many to be one of the greatest tennis players of all time. Another great Swedish sportsman from this period is the famous skier Ingemar Stenmark. He won more international events than any other alpine skier in history. 1970 saw the formation of a Swedish pop group, Abba, that was destined to become famous all over the world,. In 1974 Abba won the Eurovision concert with the song “Waterloo”. There is a picture in the school of the Abba members with the school choir. The choir performed on the original recording of ‘I have a Dream’ which was featured on Abba’s 1979 Voulez Vous album.

In the 80’s fashions change yet again. Big hair becomes popular and shoulder pads, jean jackets and leather pants are regarded as trendy. The school is now “The International School of Stockholm” with blue as its color. Popular films of the decade include : E.T. , Star Wars, Indiana Jones, Back to the Future, Crocodile Dundee and FAME. Video games continued to grow in popularity.

The ’90s decade is often considered the true dawn of the Information Age. More people own computers and mobile phones gain massive popularity worldwide. Sony’s PlayStation becomes the top selling game console. Cabbage Patch dolls and Star War toys are popular. June 30th, 1997, saw the release of Harry Potter and the Philosopher’s Stone which has since been translated into at least 67 different languages.

The new millennium started 2000 and this is the year that the students in the current fifth grade were born.The school is now Stockholm International School. The school has the International Primary Curriculum, and the IB Programmes – Middle Years Programme (MYP) and the Diploma Programme (DP). There is an Annex on Luntmakargatan to accommodate increasing numbers of students. During our United Nations Day Assemblies, there are visits by Nelson Mandela’s grandson and Hans Blix.

E-mail, Google, Yahoo!, Wikipedia, Amazon, eBay, MySpace, Facebook, Twitter, and YouTube are part of everyday life, and it is now 60 years since the school was founded. Mrs Gisela Dietze would be very proud to see that though the school has grown and changed in many ways, it remains the friendly, warm and welcoming place that continues to serve the international community in the Stockholm region.