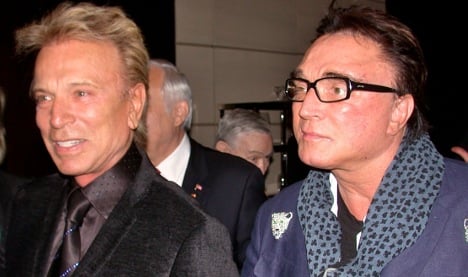 I never trust show business relationships. I always figure people are paired up just to help sell more movie tickets or whatever it is that Kim Kardashian hawks these days. I’m even sceptical when they start churning out babies (This means you Tom Cruise and Katie Holmes).

So I was a bit surprised when I recently turned up late to the 2011 German-American Hall of Fame gala at the Mandarin Orient Hotel in Manhattan and stumbled into an intimate moment between über-magicians and tiger tamers Siegfried and Roy. Hell, I hadn’t just questioned their relationship, I even assumed their names were as fake as the rest of Las Vegas.

But, just moments after everyone had abandoned the bar, I watched Siegfried Fischbacher very lovingly help Roy Horn to his feet so they could shuffle, arm-in-arm, into the guests-of-honour seats in the banquet room, which offered an aerial view of Central Park and some of the most expensive real estate on the planet.

I was somehow even surprised to hear them speak German with each other. After all those years of being as much a part of Las Vegas as the King and Wayne Newton, I wrongly assumed they would have ditched their native tongue long ago.

We were all gathered there that night to watch the duo being inducted into the Hall of Fame alongside a 19th century politician called Carl Schurz (no one has ever heard him but he made an arguably bigger contribution to America – go on, Google him). The Hall of Fame, known as GAMHOF, exists only online and also includes George Steinbrenner III, Albert Einstein and Levi Strauss.

Baseball legend Babe Ruth is also a member, though no one outside that room seems to have known he was German-American. His granddaughter was there and she looked just like the Babe, which probably makes her the subject of some strange “Boys of Summer” fetish somewhere.

The night was moderated by a TV personality I’d never heard of before named Rita Crosby (don’t bother Googling her). Her opening comments bored me with talk about loving freedom and hard work but she saved it in the end by telling Siegfried and Roy: “I’m even wearing animal-print shoes!”

I wish I’d thought of that little wardrobe flourish too, Rita.

It was a $200-a-plate shindig and the banquet hall was filled with well-fed, sometimes well-dressed Germans and German-Americans including diplomats, bankers and members of Siegfried and Roy’s fan club. I was at the you-don’t-have-to-pay-$200 journalists table, flanked by some odd colleagues, as well as an affable wire correspondent and his equally affable daughter, who were kind enough to provide photos for this piece (thanks Walter!).

Dinner was a salad and a steak so tender I wondered if the cow had spent its short existence living it up at the Manhattan Mandarin. Perfect.

When the big moment came, Siegfried abandoned his lengthy acceptance speech in favour of tears and a re-telling of how the duo met working on a cruise ship to the States decades earlier. Roy pitched in as best he could – it was pretty moving stuff.

And, in that German way of just going headlong into the truth, all evening, every other sentence mentioned how a tiger tried to kill Roy eight years ago. There are plenty of theories as to why the tiger did what it did, but I figure if you play with huge, man-eating cats, it goes with the territory.

After all, the possibility of getting mauled is what makes tiger taming so intriguing (if not anachronistic). But kudos to Roy for making the impressive recovery he has and not bitterly turning against his cats.

Still, considering the circumstances, there was an odd scrum for the stuffed white tigers placed on each table at the end of the evening. Sure, cats remain Siegfried and Roy’s trademark, but I really wasn’t interested in grabbing a likeness of something that had very nearly ended what I learned that night is a very real and touching relationship.

Congrats to them both for bringing real magic to Las Vegas.

Since a good German Stammtisch is a place where pub regulars come to talk over the issues of the day, Portnoy welcomes a lively conversation in the comments area below.

People walking in New York in May 2020. Photo: DPA

The Robert Koch Institute (RKI) changed the risk classification of the United States on March 7th.

The US was previously classed as a “high incidence area” by the RKI. These are regions where the incidence is over 200 Covid-19 cases per 100,000 residents with a period of seven days.

However, now it’s a “risk area” – which is used by German authorities to describe a region with an increased risk of infection, usually above 50 coronavirus cases per 100,000 people in seven days.

Other factors are also taken into account, such as measures in place.

It means the travel requirements for people coming from the US to Germany have changed.

However, entry from the US is only permitted in a few narrow exceptions. Proof of urgent need to travel is required, German authorities say. You can find more information in the story below.

READ MORE: When are Americans allowed to travel to Germany?

What happens if I need to travel from the US to Germany?

If you are a German resident from the US, or fall into one of the exception categories, you still face strict testing and quarantine measures.

All travellers must have a negative Covid-19 test result at the latest 48 hours after they enter Germany. It must be presented to authorities if they request it.

Some individual airlines may however still say that travellers have to present a coronavirus negative test result before boarding is allowed. You should contact your airline before travel to check.

Both PCR tests as well as rapid anitgen tests are accepted if they meet the quality standards. Testing is still mandatory even if travellers are vaccinated or have recovered from a coronavirus infection.

People returning from “risk zones” are required to self-isolate for 10 days after they arrive.

The quarantine can usually be ended with a negative coronavirus test result taken at the earliest five days after arriving in Germany.

However, states can differ on their travel regulations so check with your local authority before travelling.

Everyone entering Germany is also required to register online.

Areas of “variant concern” include Austria’s Tyrol region, the UK, Brazil, Portugal and Ireland. Even stricter rules apply for these regions.

You can find out more information about travel rules in our story below.

READ MORE: What you need to know about Germany’s latest rules on foreign travel