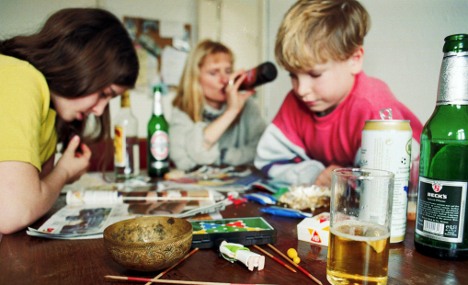 That is more than two million children in Germany whose parents are alcoholics and up to 60,000 whose parents are drug addicts, according to the annual report from the German and European observation unit on drugs and addiction.

The Süddeutsche Zeitung reported on Wednesday that Germany’s government drug and addiction expert Mechthild Dyckmans said the children were not only often damaged by their mothers’ addiction while still in the womb, once born, they were often not helped enough.

“These children are particularly often affected by poverty and social deprivation,” she said. And yet “many do not receive the support they need,” she admitted.

She also promised help, even if indirect, to addicts held in German prisons. The report estimated that up to 30 percent of male and 50 percent of female prisoners in the country took drugs, while criticising that because the approach to the subject was dealt with by the federal states, there were no national guidelines.

Dyckmans also admitted that addicts in prison had worse care than those in freedom, and that this led to the spread of disease and said she was in contact with the states to try to find ways to reduce the risks.

Illegal drug use in 2010 was stable in Germany – as it was across Europe – the report showed. The most frequently used drug remained cannabis, while hard drugs such as heroin, cocaine and LSD continued a decline which started in 2008.

The number of people who died through illegal drugs in 2010 was down by seven percent on the previous year, to 1,237, most of whom died from heroin overdoses. The Süddeutsche Zeitung did not have figures for how many people had died from the effects of alcohol.