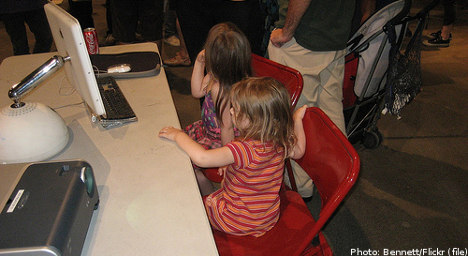 “It is clear that specific services totally dominate certain areas. Take for example Google, where 97 percent of internet users at some point use the service,” said Janne Elvelid, project manager for the report at the Internet Infrastructure Foundation (Stiftelsen för Internetinfrastruktur -.SE).

“It will be exciting to see if these dominant services manage to keep hold of their position,” he said.

Young Swedes are especially keen on music streaming platform Spotify, which almost 90 percent of 16-25-year-olds use on a daily basis. YouTube is also popular, with 99 percent of internet users under 25 using the site.

Since the year 2000, the World Internet Institute has gathered information about people’s use of information and communication technology around the globe.

In Sweden, the main contribution to this data is the study “Svenskarna och Internet” (Swedes and the Internet), which is based on 2000 phone interviews with randomly selected Swedes, age 16 and older.

Some 46 percent of Swedes also reported that they are regular readers of blogs, with the practice more popular among women than men.

Many of those keeping blogs are in the younger age groups, with a third of girls aged 12-15 writing their own blog.

The number of Swedes using mobile internet has furthermore doubled over the year, something that Janne Elvelid had been anticipating.

“Finally we see the awaited breakthrough of internet usage in the mobile phone,” he said in a statement.

The study showed that 36 percent of the population over the age of 12 use the internet in mobile devices, compared to around 20 percent previously.

Generally, Swedes use the internet about 20 hours a week, and mainly for looking up addresses and for general searches for information and facts.