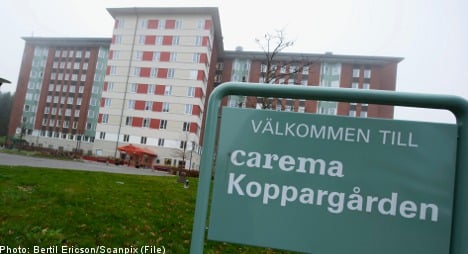 “As a direct consequence of the recent reports we’re abandoning our contract with Carema Care AB. Operations will now come under municipal management,” Stockholm mayor Sten Nordin said during a press conference on Monday.

According to Nordin, revelations about the poor conditions in several Carema-managed elderly care homes in Stockholm demand “radical measures”.

In addition to breaking its agreement with Carema, Stockholm city officials plan to launch a broad review of the city’s geriatric care.

“We need to be able to guarantee our citizens safe and secure elderly care,” Nordin said.

A the same time, the Swedish government announced on Monday it was tasking the National Board of Health and Welfare (Socialstyrelsen) with carrying out an inquiry into whether there are any differences in the quality of care provided by privately- or publicly-run care providers.

“We want to get to the bottom of this,” elderly care minister Maria Larsson said during a press conference.

Justice minister Beatrice Ask explained furthermore that the government will also look into improving protection for whistle-blowers who work for private companies.

“I think that whistle-blowers need better protection in the private sector,” Ask said.

Carema Care has come in for criticism about the quality of care offered at two elderly care homes in the Stockholm area, Koppargården in the northern suburb of Hässelby-Vällingby, as well as Tallbohov in nearby Järfälla.

The poor conditions, which included shortages of toilet paper and soap and other problems maintaining proper hygiene, were reported by Carema workers to the Dagens Nyheter (DN) newspaper.

The municipality of Järfälla has already said it won’t renew its contract with Carema.