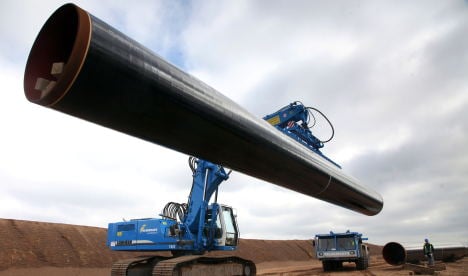 Angela Merkel and Dmitry Medvedev will headline a guest list including the prime ministers of France and the Netherlands, Francois Fillon and Mark Rutte, and EU energy commissioner Günther Oettinger to mark the first of controversial gas links under the Baltic Sea.

The ceremony in the northeastern German town of Lubmin will celebrate the arrival of the first Russian gas through the 1,224-kilometre-long (761 miles) pipeline into the European grid.

Once operational in late 2012, it will transport 55 billion cubic metres (1.9 trillion cubic feet) of gas a year to the EU for at least half a century, enough to supply around 26 million homes, Nord Stream says.

The consortium for the €7.4 billion ($10.2 billion) project is a joint venture between the Russian state-held gas giant Gazprom, German firms BASF and EON, Dutch company Gasunie and GDF Suez of France.

Russia loaded the first gas into the link in September and aims to use it to reduce its dependence on Ukraine and other transit nations where there have been pricing disputes that have in some cases disrupted delivery to Europe.

However, the project has been hotly contested since then Russian president Vladimir Putin and former German chancellor Gerhard Schröder presided over the signing in 2005. Schröder is now chairman of Nord Stream’s supervisory board.

Poland and the Baltic states have long voiced fears over the project, which bypasses their territory, arguing they will be on their own when bargaining with Russia for their own gas supplies.

Sweden has raised ecological objections to the massive seabed pipeline, which Gazprom has brushed aside.

“There had been concerns among some but good sense prevailed,” Russia’s ambassador to Germany, Vladimir Grinin, told AFP.

“Germany’s recent decision to abandon nuclear energy, which means that it will have a bigger need for gas in the medium-term, has led many to see more clearly.”

Germany this year decided to shut down all of its nuclear power plants by the end of 2022 in reaction to the disaster in March at Japan’s Fukushima facility.

Nord Stream is becoming operational just as the EU re-assesses its own reliance on Russia – currently supplier of more than a quarter of Europe’s gas – as its primary energy source.

A Nord Stream spokesman insisted Europe had nothing to fear. “That share (about 25 percent) will not change significantly when this is up and running because consumption is rising at the same time. We may reach around 30 percent,” said Jens D. Müller.

An energy expert at Germany’s DIW economic institute, Claudia Kemfert, said it would nevertheless be “wise for the West to diversify.”

“There is a gas surplus in the world – why fixate on Russia?” she asked, noting the market role to be played by liquefied natural gas.

However, the debate has been coloured by Gazprom’s mounting influence, particularly in Germany, where it owns a first-division football club and is in talks with RWE about intensifying cooperation.

RWE is involved in a competing pipeline project to Nord Stream – Nabucco – which is backed by the European Union and the United States. The route it would take, from the Caspian Sea via Turkey and eastern Europe, bypasses both Russia and Ukraine.

“The Nabucco project is already running into trouble, and closer ties between RWE and Gazprom would further decrease its chances,” Kemfert said.