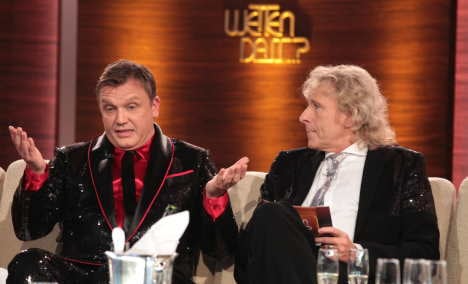 Two years ago, Kerkeling caused a stir with his character Horst Schlämmer, who rose to fame as a mock candidate for German chancellor during parliamentary elections.

His slogan, inspired by US President Barack Obama’s election campaign, was “Yes weekend.”

On Saturday night when Gottschalk asked Kerkeling if would like to become his successor at Wetten, dass..?, Kerkeling simply replied, “No, I don’t want to.”

Later on, the comedian said one of his main reasons for rejecting the hosting gig was his desire to work on a variety of different projects, something he would not have been able to reconcile with his duties as the show’s presenter.

Kerkeling said he was flattered to be considered the favourite to replace Gottschalk but said he wanted to make new films, write a book and plan a new documentary series.

ZDF programme director Thomas Bellut expressed the network’s disappointment. “It’s a pity that he didn’t accept the offer, but I respect his decision and the rationale behind it,” he said.

Bellut added that the decision of who would take over from Gottschalk would be made after the presenter’s last episode on December 3.

Gottschalk quit broadcaster ZDF in July to host a new chat show on rival public network ARD. The move came in the wake of an on-air accident on Wetten, dass..? that left a young man paralysed after a botched stunt.

Kerkeling’s appearance on the show boosted viewership to 9.93 million, ZDF said. About one in every three Germans tuned in to Saturday’s programme.