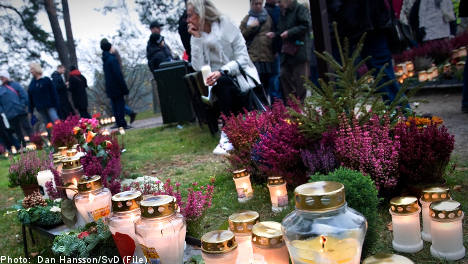 All Saints plays an important role in the Swedish calendar, as the weekend when Swedes come together and light candles at graveyards all across the country to remember and honour their dead.

However, the celebrations can also take a a more serious turn and police across Sweden have reported a busy weekend with both violence and insobriety.

In northern Sweden, police and emergency services were busy after a man in Jokkmokk was stabbed in the back.

“We have had quite a lot to do, it’s been a mess last night. The most serious was an assassination attempt outside Jokkmokk,” Erik Kummu, police officer in Norrbotten, told the TT news agency.

A man is suspected of having stabbed another man, who is reported to be in his 30s, in the back at about 4am Sunday in an apartment.

“The stabbed victim is the apartment owner. He was taken to the hospital and now an investigation of the apartment is being carried out. Technicians are on their way and the suspect will be interrogated as well as the plaintiff,” Kummu told TT.

Otherwise, Norrbotten police had their hands full dealing with smaller infractions of the law.

In Piteå, a man bit a woman in the nose.

“He is sobering up and will probably be arrested. Otherwise, it has been pretty much assault and drunks,” said Kummu.

In Degerfors a man was rushed to the hospital with serious injuries after being beaten. According to police, the offender “kicked or jumped on his head.”

Örebro police said both Friday and Saturday evenings were strenuous with an unusually high number of cases related to assaults, fighting and drunkenness.

In western Sweden, police noticed an increase in the number of people out on the town, but said there had been no major violent crimes in connection with the jovial holiday weekend.

“It’s been quite a lot to do, drunkenness, punching, fighting and things like that. But it was calmer than it was last Friday night,” Åsa Andersson, from Västra Götaland’s police force, told TT.

Stockholm was not spared from violence.

“We have had the usual weekend bustle with a lot of calls, which has led to a lot of work. But no serious injuries,” Ulf Lindgren from the Stockholm police said to TT.