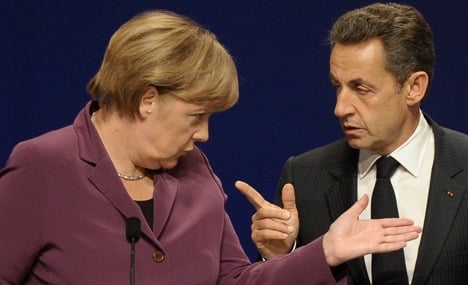 Merkel and Sarkozy both said they hoped Greece would remain in the eurozone, but warned that Athens would not get a free ride. They demanded the referendum be held as soon as possible to clear up uncertainty.

The European leaders also pledged to stand by the euro, even if the Greeks were to vote against it.

“If the Greeks say they do not want to stay in the euro, we will accept it, but we will not abandon the euro,” Merkel said.

Without its next eight-billion euro transfer, observers warn, Greece would face problems paying government salaries and a messy debt default within weeks.

Papandreou agreed Greece’s future in the euro was at stake and said a vote could be called on December 4. He did not reveal the wording of the referendum question, but he said he was sure Greek voters want to stay in the euro.

He insisted that it was the “democratic right” of the Greeks to vote on the bailout plan – which foresees more tight austerity measures – but added: “I believe that the Greek people want to be in the eurozone.”

He conceded that a vote put the country’s euro membership at stake: “This is a question of whether we want to remain in the eurozone. That’s very clear.”

Leaders of the world’s 20 largest economies, including Hu Jintao of China, Barack Obama of the United States as well as Merkel and Sarkozy meet for their first full session of a two-day summit on Thursday, when they will discuss Greece and the eurozone debt crisis.

The White House said it wanted “unanimity of purpose” to emerge from the G20 and White House spokesman Jay Carney said the situation would be a key subject.

Papandreou has headed back to Athens to face a confidence vote in parliament, due Friday.