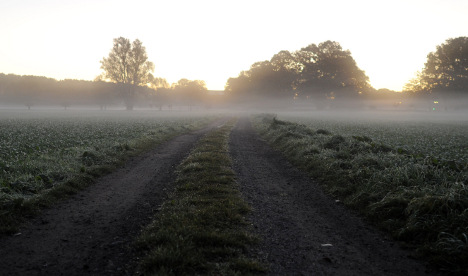 Temperatures are also expected to climb a little higher than last week, with much of the country “enjoying the kind of warmth that would’ve been welcome this summer” said Helmut Malewski of the German Weather Service.

Tuesday night will be clear with patches of hazy cloud throughout most of Germany, apart from a band of rain across the Rhineland and Lower Saxony. Most of the country will be between 10 and 3 degrees Celsius, while temperatures will be at their lowest in the German Alps, at 0 degrees.

On Wednesday morning, the night-time rain may linger on in the north and the south will mostly be blanketed in fog. But this will burn off as the day progresses, leaving a mostly clear afternoon.

Daytime temperatures should reach an unseasonably warm 19 degrees in western regions, but in areas where the sun hasn’t managed to burn off the fog, temperatures will stay around 10 degrees.

Whilst the wind will pick up a little along the coast on Thursday, southern regions will be bidding farewell to the stubborn fog as it finally dissipates and makes way for sunshine. But it will stay cloudy with a slight chance of rain in the west.

Clouds will return by night-time, bringing scattered rain showers across the country. Only eastern skies will remain clear, with a chance of light frost underfoot.

Temperatures will drop to a more typically November level of two degrees during the night, but will pick up considerably by Friday daytime, reaching highs of 18 degrees.