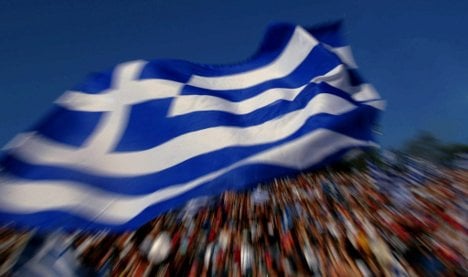 “The chancellor and the French president have agreed to hold a round of talks on Wednesday, November 2 in Cannes with the European institutions and the IMF as well as a meeting with the Greek side,” the statement said Tuesday.

The emergency meeting was arranged during a phone call between President Nicolas Sarkozy and Chancellor Angela Merkel to discuss Greece’s call for a referendum on a euro debt rescue package agreed at an EU summit last week.

“France and Germany are determined to ensure with their European partners the full implementation, as quickly as possible, of decisions taken by the summit, which today are more necessary than ever,” the statement said. “France and Germany are convinced that this agreement will allow Greece to return to sustainable growth.”

Sarkozy is to hold a summit of the Group of 20 industrialised nations in the Mediterranean city of Cannes on Thursday and Friday.

Earlier on Tuesday, Rainer Brüderle, a leading member of Merkel’s centre-right coalition, said Europe should prepare for Greece to go bust after the country announced its intention to hold a referendum on the unpopular bailout package.

“If Greece says ‘No’ to combating its structural weaknesses, becoming more competitive, and to reform, then in my opinion it will go bankrupt,” the parliamentary group leader of the pro-business Free Democrats told public broadcaster Deutschlandfunk.

Brüderle said Greek Prime Minister George Papandreou’s decision on Monday to call for a confidence vote and a referendum on last week’s EU debt deal was a “strange course of action” in light of the potentially disastrous outcome.

“The country was poorly governed for decades and its government made a wrong decision that manoeuvred it into this crisis,” he said.

But Papandreou on Monday appeared willing to take a political gamble to silence growing opposition to his policies.

The Socialist premier, who has 153 deputies in the 300-seat parliament, has faced increasing dissent within his own party over the tougher austerity policy monitored by the EU and the International Monetary Fund that has sparked general strikes and widespread protests, many of them violent.

The confidence vote is expected to be held on Friday while the referendum is slated for early next year.

An adverse result in either process would scupper the EU deal, which is designed to cut Greece’s debt load of over €350 billion ($495 billion) by around €100 billion. It was only reached after months of haggling in marathon talks last Thursday and besides the Greek debt reduction included measures to bolster the European banking system, help other struggling eurozone member states and boost the size of the bloc’s bailout funds.

The German Finance Ministry, which along with France had hammered out the EU deal, declined to comment on the announcement, with a spokesman in Berlin calling it “an internal political development in Greece on which the government does not yet have any official information.”

In a survey in To Vima weekly on Sunday, over 58 percent of Greeks termed the deal ‘negative’ or ‘probably negative’, although over 72 percent of those polled said Greece should remain in the euro.

Papandreou’s gambit came as Greece faced delicate negotiations with its eurozone peers on the details of last week’s agreement and with global bankers asked to accept a 50-percent loss on their Greek debt holdings.