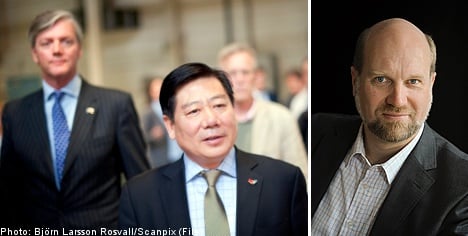 The Local spoke to business expert Mikael Wickelgren of the Centre for Consumer Science at the University of Gothenburg to get some perspective on what this means for Saab and for Sweden.

The Local: Will this save Saab?

Mikael Wickelgren: It’s way too early to say that yet. This deal alone can’t save the company anyway, it just means that the restructuring will not be cancelled.

TL: Is Saab a profitable deal for the Chinese?

MW: At the moment Saab can’t be seen as a profitable deal for anyone. It will take measures; basically money to be pumped in to the company to pay off debts and make investments in the company. It will cost a lot of money to start with.

TL: Did the Chinese make a good deal over Saab?

MW: Well, the deal is hardly established yet. All we have seen so far is a so called memorandum of understanding, which basically means that they will now sit down and work out the actual deal.

TL: Is Saab going to be able to continue being a ”Swedish” car?

TL: Will cars continue being built in Trollhättan?

MW: There are no indications that the production will be moved in the short term, that is, within the next 5-6 years. Trollhättan is and will continue to be the epicentre of Saab production.

TL: What does this mean for Saab’s future?

MW: It was completely crucial for Saab. If this hadn’t happened, they would not have been working on the particulars of the Saab future but the Saab bankruptcy right now.