“Swedish Automobile N.V. (Swan) announces that it entered into a memorandum of understanding with Pang Da and Youngman for the sale and purchase of 100% of the shares of Saab Automobile AB (Saab Automobile) and Saab Great Britain Ltd. (Saab GB) for a consideration of 100 million euros”, the company said in a statement.

After the announcement, the office of Saab’s court-appointed administrator, Guy Lofalk, withdrew a petition to abandon the reorganisation of the beleaguered Swedish carmaker, a step taken last week when talks with the Chinese partners to obtain €245 million ($335 million) in funding in exchange for about half the company appeared to have collapsed.

News of the deal entails major changes in the conditions governing Saab’s reorganization, according to Lofalk.

“In light of the large number of jobs and their meaning for the region, as well as the large loss of value that a bankruptcy would entail, it’s my assessment that these new conditions must be reviewed before a decision can be made about whether the reorganization should be halted,” wrote Lofalk in his petition.

The Vänersborg District Court in southwestern Sweden was expected to decide Friday whether to grant the petition.

The demand to end the reorganization of Saab came after its Dutch parent company Swan said the Chinese companies had failed to honour a partnership deal and provide €70 million in bridge financing while Saab underwent the restructuring process.

Swedish daily Svenska Dagbladet (SvD) reported earlier in the week that Pang Da and Youngman had instead offered a mere 200 million kronor ($30.4 million) to buy all of Saab.

“We have the deepest pockets onboard now ensuring that the company will blossom, so I’m thrilled,” he added.

Swan said Friday its memorandum of understanding with the two Chinese firms was now “valid until November 15 of this year, provided Saab Automobile stays in reorganisation.”

The Chinese companies will dish out the €100 million payment in installments, Swan said in its statement, adding that “an important consideration (for entering) into the transaction is the commitment of Pang Da and Youngman to provide long term funding to Saab Automobile.”

With the deal, Saab will follow in the footsteps of Sweden’s other large carmaker Volvo, which was bought by a Chinese company, Geely, in August 2010, for $1.5 billion.

Muller, whose company Swan — at the time called Spyker — bought Saab from US giant General Motors early last year for $400 million, also then rescuing it from the brink of bankruptcy, said Friday he thought the price was

“It’s right if you consider the company’s current situation and the fact that it has not produced cars for six months,” he told TT.

Production at Saab’s Trollhättan factory in southwestern Sweden has been halted almost continuously since April as suppliers stopped deliveries over mountains of unpaid bills, while the company’s some 3,700 employees have seen their salary payments significantly delayed for four straight months. 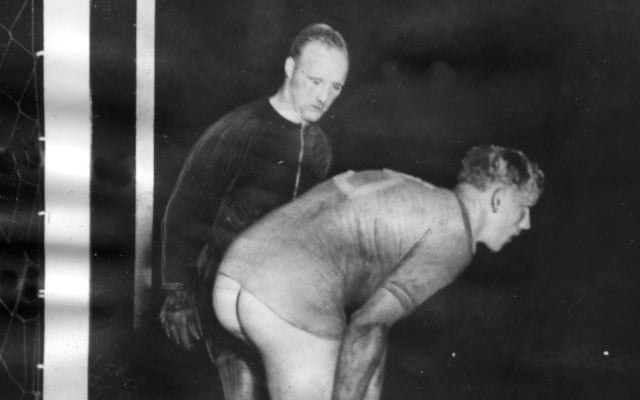 Scroll down for the whole image. Photo: PrB/TT

Brazil would seem to be one of the last places in the world where a bit of nudity could cause offence, never mind create an international uproar. And yet that is exactly what happened 70 years ago when Swedish football player Sven Hjertsson dropped his drawers during a match in Rio de Janeiro, Brazil.

Faced with a broken waistband and unwilling to depart the field and leave his team a man down during the close match with Fluminense FC, the 25-year-old defender for Malmö FF made the decision to do a quick change near his team's goalpost.

From the Swedish point of view, the brief nudity this entailed was insignificant. Based on what the Swedish players, coaches and journalists had seen on Brazilian beaches during the 1949 tournament, they clearly assumed the Brazilians would feel the same way. What happened next proved just how vastly different the two countries' views of acceptable nudity were.

“The next day, the Swedish 'Naked Shock' took up full pages in the [Brazilian] megacity's newspapers. The upper-class Fluminense… had never been involved in anything like this,” journalist Henrik Jönsson explained in a 2009 article in the Swedish newspaper Sydsvenskan.

In retrospect, it's difficult to say who was more shocked: the Brazilians by Hjertsson's mooning or the Swedes by the Brazilian reaction to it.

“It was a scandal! The Swedish journalists who were on the trip told us about the uproar. People went and confessed after the game. Dad thought it was ridiculous. On the beach, the Brazilians had minimal swimwear,” recalled former Swedish football player Bertil “Klumpen” Nilsson, whose father Sven Nilsson was a Malmö FF coach, in the Sydsvenskan article. “Hjertsson's white butt became the big topic of conversation when Dad came home. No one understood the Catholic double standard.” In the end, Malmö FF lost the match 2-1. The team – the first from Sweden to be invited to Brazil – did not have an easy time in the tournament. The effects of a long flight, difficulty adjusting to the hot and humid climate of Brazil, and a serious bout of diarrhoea that decommissioned half the team during the first week, had all taken their toll. Champions at home in Sweden, the team nonetheless left Brazil without a win.

READ ALSO: Ten rules for getting naked in Sweden

As for the “Naked Shock”, it seemed only to burnish Hjertsson's reputation back in Sweden, and perhaps even overshadow his legacy to some extent. During his 12-year career at Malmö FF, the team won gold four times in the national championships. He also played 13 times for the Swedish national team, which was considered one of the world's greatest football teams between 1945 and 1950. In 1950, the year after the incident in Brazil, Sweden ranked third in the world ranking, ahead of Brazil in fourth place.

Hjertsson died in 1999, but the photo of him from 1949 lives on as a singular glimpse into international football seven decades ago.