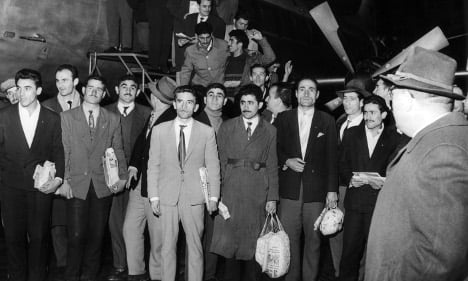 On October 30, 1961, booming West Germany signed a recruitment agreement with Turkey to supplement its workforce. The mostly unskilled labourers were promised minimum wages and accommodation for the duration of their temporary contracts.

Some 710,000 people answered the call until the 1973 global oil crisis ended the recruitment drive. Thousands of workers returned to Turkey, but many instead decided to bring their families to Germany, triggering a massive increase in the country’s Turkish population.

Today, more than 2.5 million people in Germany have Turkish heritage. Their presence has indisputably enriched Germany both culturally and economically – but it has also sparked countless debates concerning the integration of a group long seen only as guests eventually expected to leave.

This discussion hit a low point in 2010, when the controversial best-selling book by ex-central banker Thilo Sarrazin, Deutschland schafft sich ab (Germany Abolishes Itself), contended Muslim immigrants were a drag on German society.

The damage done was similar to that of a “bull in a china shop,” according to Klaus Bade, head of the German Advisory Council on Integration and Migration.

But 50 years ago, neither German nor Turks were concerned with the challenges of integration, since no-one thought the first Turkish labourers would stay. Only decades later did both sides realize there was plenty of work to be done.

In 2005, Germany’s new immigration law came into force, formulating terms and responsibilities for immigrants. Those wishing for German citizenship now have to pass a naturalization test and prove they can speak German, though there are still many Turkish immigrants – often women brought over as brides – who cannot communicate well in the language. There are now also government-supported courses meant to ease integration.

Nonetheless, fixing past deficits will take time. Turkish immigrants still struggle in Germany’s labour market, mainly because they lag behind in the education system.

Children from immigrant families go to university-track high schools less often than their German counterparts and are often disproportionately represented at lower secondary schools. There is also a higher drop-out rate among students with an immigrant background.

For Turks, being non-EU citizens is also problematic. Foreigners born in Germany must decide by the age of 23 between their parents’ nationality and German citizenship. An long-outstanding bill was passed in the German parliament to recognize vocational training acquired abroad by immigrants more quickly. But is its questionable whether the bill will receive a majority in the upper house, the Bundesrat.

While Turks are frequently confronted with their integration failures, Germans must contend with widespread Islamophobia and discrimination against immigrants.

Ahead of official celebrations on November 2 marking the landmark recruitment treaty, Chancellor Angela Merkel has made clear she has no illusions about Germany’s relationship to its Turks.

“We’re not looking for exaggerations, we are not out to exacerbate things, but we’re calling the facts by name and not sweeping the problems under the table,” Merkel said recently.

But the difficulties shouldn’t overshadow the success stories; those Turkish Germans who have made a positive impact on German society.

Whether it’s Mesut Özil giving the national football team creative spark, Fatih Akin representing German cinema at the Cannes Film Festive, or Cem Özdemir leading the Green party, modern Germany would be unimaginable without the contributions of countless Turkish immigrants and their children.