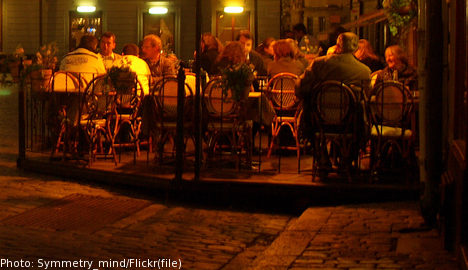 In September daily Dagens Nyheter (DN) reported that a Danish couple holidaying in Sweden had been tricked into paying an extra 20 percent tip on their dinner.

When Paul Eller and his wife Else-Marie were presented with a bill on which a red stamp at the bottom stated that a service charge of 20 percent wasn’t included, they decided to ask the waiter at the Stockholm restaurant what this meant.

”He said that restaurants in Sweden can choose whether or not they want to include a tip in the price,” Eller told DN at the time.

After running the story, DN has received calls from other customers who have experienced similar treatment at other Stockholm eateries.

As in the case with the Danes, some bars have printed on their bill, in several languages, that a tip was not included.

Recep Celik, head of marketing at Belgobaren, in central Stockholm, told the paper that there’s nothing in Swedish marketing law that says restaurants aren’t allowed to do this.

But at the Swedish Hotels and Restaurant Association (Sveriges hotell-och-restaurangföretagare -SHR) disagrees, saying it plans to contact the restaurants mentioned in the DN article.

“This is a bad trend we’re seeing and we can’t let it spread within the trade,” Clemens Wantschura of Hotels and Restaurant Association told DN after the news of more examples of the tipping scam.

Belgobaren, however, sees the practice more as a service to their customers.

“The reason we’ve printed this message on our bills is because many foreign costumers have inquired about Swedish tipping customs. It’s to clarify that tips aren’t included in the price,” he told DN.

“We didn’t start this custom. It’s being done at most Stockholm bars.”

Speaking to The Local in the wake of the case of the Danes who had been duped, Clemens Wantschura of Hotels and Restaurant Association nevertheless said he was worried that Stockholm eateries are trying to take advantage of foreign visitors to the Swedish capital.

”This sounds like an attempt to trick uninformed tourists into paying more,” he said.

According to Wantschura, restaurants should not get involved with customers tipping the staff at all.

”A tip should never be anything more than a reward for good service to the serving staff – it has nothing to do with the restaurant,” he told The Local in September.

He also added that there is an ongoing discussion as to how much a customer ought to leave as a tip, but he maintained that there are no stipulated rules as to percentage, or whether you should pay the wait staff anything at all.

“You should keep in mind, as well, that all serving staff in Sweden are salaried, they don’t have to survive on tips as the case may be in other countries,” said Wantschura.

“I tell people they must decide themselves if they want to pay anything, and in that case how much, depending on how much they thought the service was worth.”