The lion’s share – $300 million – was held by Mubarak‘s elder son Alaa, a businessman who kept out of politics, said Assem al- Gohari, who heads the Illicit Gains Authority.

The balance was held by his younger son Gamal, a leading former ruling party politician who had widely been seen as his father’s heir apparent.

Both sons are in custody in a Cairo prison as they stand trial on an array of charges, including corruption.

The assets of Mubarak‘s two sons make up the great majority of the $460 million in Egyptian funds frozen by the Swiss government since the veteran strongman’s overthrow in February, the official MENA news agency quoted Gohari as saying.

Switzerland vowed last Wednesday to expedite the return of funds once held by members of the Mubarak regime and that of ousted Tunisian strongman Zine El Abidine Ben Ali.

“Switzerland is the seventh financial centre in the world. It is the first in terms of restitution of funds stolen by dictators,” said the foreign ministry’s head of the international public law department Valentin, Zellweger, quoted by the ATS news agency. 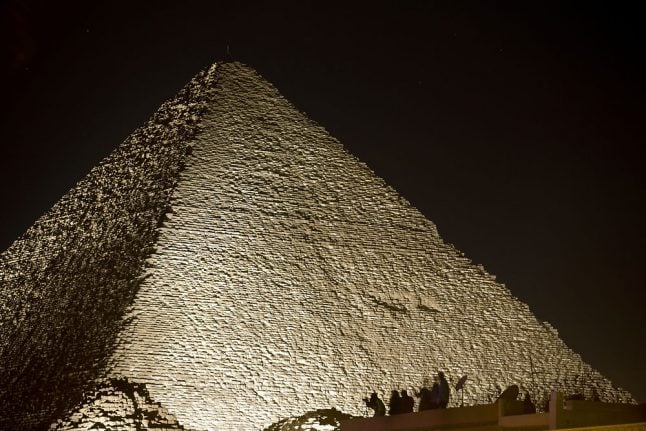 In 2003, an Egyptian film titled The Danish Experience premiered and instantly became a Middle Eastern blockbuster about the extreme cultural differences between Egypt and Denmark, particularly when it comes to sex.

The Danish Experience was a comedy about a Danish woman, Anita, who visits Egypt and stays with a government minister and his four 20-something sons and teaches them her perspective on sexual freedom.

In one scene, as Anita talks about how nudity is socially acceptable in Denmark, her Egyptian host family are constantly astonished by how confidently she is tackling a topic they consider a taboo.

Fifteen years later, when 23-year-old Dane Andreas Hvid posted a video of him and a friend climbing a pyramid, along with a sexually charged photo, these cultural differences became relevant again as Egyptian anger was sparked.

Although a similar incident occurred in 2016, when a German tourist was banned from re-entering Egypt after he climbed a pyramid, it did not spark the same outrage, perhaps because the only difference was that no sex was involved.

In one of the most memorable scenes in the 2003 film, Anita takes off a blanket and appears to be naked. “Sex is not a bad thing, Mr. Qadri,” she says, while Qadri feels uncomfortable and puts the blanket back on her.

For Danes, it is socially acceptable to swim naked, and there are no laws prohibiting such nudity. There are also spaces where it is allowed to publicly have sex, such as Ørstedsparken in Copenhagen.

A study by YouGov in 2013 found that 41 percent of Danes who participated in the survey have previously engaged in sexual activity in a public space, giving Denmark the highest score for public sex among Europeans.

The total opposite is true in Egypt. “Inciting debauchery” and “harming public morality” are criminal charges that could lead to imprisonment or a fine.

Last year, an Egyptian singer, Shyma, was jailed for both charges after she appeared in a music video that was perceived as “sexually charged”.

And just a few days before Hvid’s video went viral, two conservative lawyers announced they were suing actress Rania Youssef over a “revealing dress” she wore to a film festival, accusing her of “incitement to debauchery”.

The same charges are often used in the crackdown on the LGBTQ community.

Denmark was the first country in the world to recognize same-sex marriage. In Egypt, the police arrested about 100 concert attendees last year for waving the rainbow flag.

The incident also tells us something about corruption in Egypt. In an opinion piece in Egypt’s state-owned newspaper Al Ahram, Ahmed Abdel Hakam wrote that in exchange of money everything is possible in Egypt.

Two suspects were arrested on charges of helping Hvid and his friend climb the pyramid.

One of the two, a woman, established contact between the Danish couple and the camel owner, who illegally transported them to the pyramid on the evening of November 29th for the price of 4,000 Egyptian pounds, around 1,500 kroner (200 euros), according to the Egyptian interior ministry.

“The moral that appears out of this story, even if it’s wrong, is that it is possible to commit any [act of] indecency or corruption as long as you find someone who helps you for [an amount] of money,” Hakam wrote.

Corruption is also another major difference between Egyptian and Danish societies, one that makes disrespect and vandalism of one of the world’s archaeological wonders possible – by foreigners and with Egyptian complicity.

Social media users in Egypt have responded to the incident by in criticizing the government and its administration of the area where the pyramids and the Great Sphinx of Giza are located.

A few days after the video of the Danes climbing the Great Pyramid emerged on social media, the government announced that Orascom, a company owned by Egypt’s wealthiest man, will take over the administration of tourist facilities at the area.

The Danish Experience concludes with Anita deciding to leave Egypt after the culture clash causes conflict within her host family. Hvid has said that he is not planning to return to Egypt, fearing legal trouble over his sexually-charged, unlawful visit to the pyramids.