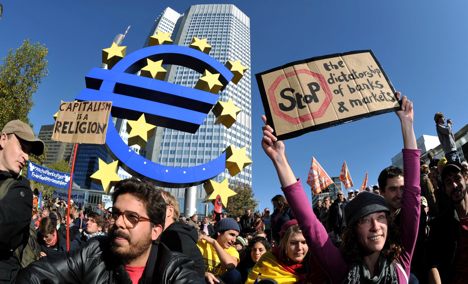 Police estimated that around 5,000 demonstrators marched through Frankfurt to the headquarters of the European Central Bank (ECB), while almost 10,000 took to the streets of Berlin. Several thousand joined protests in Munich, Cologne and other cities.

The Cologne protests adopted the slogan “Real Democracy – now!” and declared solidarity with the Occupy Wall Street movement in New York, which is demonstrating against perceived injustices in the worldwide banking system.

But the German protesters also focussed their anger more specifically on the debt crisis currently gripping the eurozone. The Frankfurt protesters began the Occupy Frankfurt event by performing a play entitled “Europe – a Greek tragedy.”

Organizers declared they would occupy and blockade the square in front of the ECB “for an undefined period of time.”

Demonstrators held up placards reading “You are speculating with out lives,” and “You are betting our future,” and called for taxes on financial speculation.

Protesters gathered at Berlin’s Alexanderplatz square at midday to march on Angela Merkel’s chancellery. Among the organizers was the anti-globalization protest group Attac.

Some demonstrators were also planning to set up a protest camp like those in Madrid and New York.

Sikle Baskaya, 32, said she had travelled from the city of Heidelberg to attend the rally. The financial sector was irresponsible and greedy, she said.

“Humanity and nature are also pushed into the background by the thirst for money,” she said, citing market speculation in basic foodstuffs and the unequal distribution of wealth. She herself worked in the financial sector, she added.

A 27-year-old schoolteacher who gave his name only as Tobias, said: “I see the global capitalist system as a time bomb for humans but also for the planet. Our (material) well-being is financed to the detriment of other countries, (and) the ECB represents this unjust and murderous system,” he added. He carried a sign reading “Capitalism Will Kill Capitalism.”

Pensioner Christl said she came thinking of her children and grandchildren “who will have to pay for our debts. “I think the banking system is awful overall,” she added. “Investment banks should bear the cost of their losses on their own. It’s

time to rise up, otherwise nothing will ever happen.”

Frauke Distelrath of the Attac she was pleased with the turnout. “We chose to demonstrate outside the ECB, but we could have demonstrated outside Deutsche Bank, or outside the Frankfurt stock exchange,” she said.

“But the ECB is the engine driving the troika,” she added, a reference to the ECB, the International Monetary Fund and the Union European – the three international organisations — funding the bail-out of debt-hit Greece.