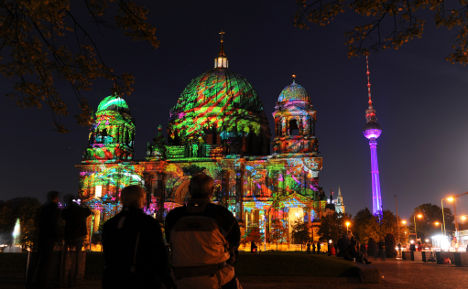 If you’re in Berlin this week you might notice fancy light patterns dancing across the city’s landmark buildings, as well as some fanciful light installations dotted around the streets. The Berlin Festival of Lights takes place every October, and it’s a fun time to visit the German capital. “Open House Night” is a highlight of the annual event that offers visitors a rare behind-the-scenes look at some of Berlin’s architectural stars.

Zeig Her, Führ Vor, Tausch Ein – Presence Is The Artist

Visual artists who work in performance face an interesting conundrum. What space suits their work? A theatre, a gallery, or something else? General Public attempts to offer a solution, or at least initiate the conversation, with three days of presentations, performances, and discussions (in English).

Swap in the City

It’s ladies night Sunday in Cologne when Swap in the City sets up beneath E-Werk’s extraordinary soaring ceilings. Grab a cocktail and groove to the tunes while you browse the racks of chic threads. But you have to give in order to receive, so clean out those closets and head over to E-Werk with at least three new or gently used pieces and let the swapping begin!

Since Germany and France share a border, it’s only natural that their cultural pursuits would meld. Jazz music is one of the best examples of this bi-national artistic fusion. The Vive Le Jazz festival, organized by the Cologne and Dusseldorf French Institutes celebrates this partnership with two weeks of not only music, but movies and exhibitions as well. Don’t miss French tuba player Michel Godard and German drummer Gunter Baby Sommer’s Sunday night concert.

This weekend the world’s biggest book fair opens to the public. So even if you’re not an editor, publisher, or author, you can spend Saturday and Sunday running your fingers along all those beautiful dust jackets and e-book readers. Iceland is this year’s guest of honour, so check out the exhibition “Books on Iceland” then go get lost in an endless world of international literature.

The Barrelhouse Jazz Band has been blowing strong for half a century. In honour of the occasion, the guys are throwing a bombastic jazz bash Saturday in Frankfurt. Soloists from New Orleans, New York, and Milan join Maryland Jazzband Cologne, the Joscho Stephan Quartett, and the Anke Angel Boogie Trio for one hot night of hootin’ tootin’ fun. After the concert the party spills out into the foyer.

In 1979, choreographer Lucina Childs, composer Philip Glass, and visual artist Sol Lewitt collaborated on a dance piece they simply called “Dance.” Propelled by postmodern minimalism, the Lucinda Childs Dance Company performs the piece this week in Hamburg. Though the choreographer no longer dances the solo, it’s her larger than life projected image you’ll see stepping and swaying along to the movements of Anne Lewis in this rare performance.

Germany’s largest LGBT film festival starts rolling in Hamburg this week. The colourful programme includes over 100 films from around the world, many with English subtitles. Angel, Sebastiano D’Ayala Valva’s tale of a Parisian transsexual’s first trip home to Ecuador, and Tien-yu Fu’s directorial debut Somewhere I Have Never Travelled both screen Wednesday. After the movie, settle in for some cineaste discussion with a drink at the festival night bar.

Describe Germany in three words. If you said “bratwurst, beer, and Kraftwerk,” you’re right. The electronic music pioneers have impacted music and culture enormously, and though all three concerts in Munich are sold out, Kunstbau has something spectacular up it’s sleeve. A multi-channel 3D video installation offers a fantastic sensory explosion for Kraftwerk fans starting Saturday.

The Bread and Puppet Theatre Exhibition

Nestled among the green hills of Vermont, US, the Bread and Puppet Theatre Museum is a hive of creative political puppetry. Founder Robert Schumann was born in Silesia, studied in Germany, and started baking bread and making puppets in New York City in the 1960s. Check out the legendary theatre man’s new exhibition at the Munich City Museum when it opens Wednesday night.

It’s museum time! From the Alpine Museum to the America House, cultural institutions around the city are staying open late Saturday night. Hum along to Russian songs at the Tolstoy Library, see a video projected onto the side of the Pinakothek der Moderne, and hear the sounds of a “Pomegranate Tree” at the Museum of Egyptian Art. One ticket is all you need for this smorgasbord of culture and fun.