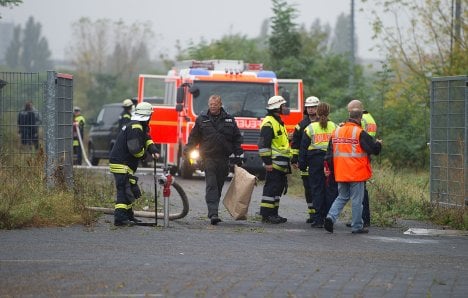 Another unexploded device was also found alongside it, and the police have not ruled out finding further explosives – simply petrol-filled bottles – elsewhere. The device at Staaken was discovered during repair work. No-one was injured.

A police spokesman said, “There was an incendiary device that was set off somehow, possibly on Monday or Tuesday.” Another device was found by a train-driver between the Schöneberg and Südkreuz stations on the local public transport network.

Transport authorities said service had been suspended on both lines, while intercity and regional trains travelling west were diverted.

Police believe the perpetrators were left-wing radicals who laid all the devices at the same time. Several have now been discovered around the city.

In a sign that authorities are now taking the events more seriously, the German Attorney General (BAW) decided Wednesday to take over investigations into the attacks from the Berlin police.

The BAW usually covers terrorism and espionage investigations in the event of direct internal threats on Germany. “We are investigating on suspicion of anti-constitutional sabotage,” a BAW spokesman told the Tagesspiegel newspaper.

On Monday, a radical leftist group named “Hekla” claimed responsibility in an email to news agencies and on an online forum.

The email said the group was protesting German involvement in Afghanistan and called for US soldier Bradley Manning, charged with leaking classified documents to Wikileaks, to be released.