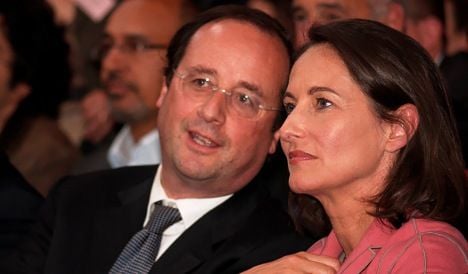 Defeated hopeful Segolene Royal backed Francois Hollande, her former partner and the father of her children, hours before he was to face rival Martine Aubry in an increasingly bitter battle for the Socialist party nomination.

“I give my support to Francois Hollande,” said Royal, who lost to Sarkozy in the 2007 presidential poll and took only seven percent in Sunday’s first round of the Socialist primary, forcing her out of the race.

Hollande “came in first in the first round and it is legitimate to increase this lead,” Royal told AFP, adding that “my new ideas have been taken into account in the candidate’s programme.”

Hollande, who has had tense relations with his former partner since she lost the 2007 race and he moved in with his new girlfriend, thanked Royal for the “elegance and responsibility” of her decision.

Hollande took the lead over Aubry in the first round of the primary but, at 39 to 31 percent, their scores were close enough to give her a chance to outflank him on the left and grab the nomination in next Sunday’s run-off.

The stakes are high — opinion polls suggest either Socialist would beat centre-right incumbent Sarkozy in next April’s presidential election.

The tone of the battle has hardened ahead of the debate, with Aubry hitting out at Hollande’s alleged centrist tendencies.

“I have said what I want to do, and it’s the opposite of the soft left,” Aubry, the 61-year-old mayor of Lille, said this week, in a dig at Hollande’s supposed lack of steel.

With the war of words escalating, a spokesman for organisers of the Socialist primary, Jean-Pierre Mignard, warned the two candidates against “denigration” and “bickering”.

The debate, which will air on television from 8.35pm, will see the two rivals answering questions on the economic crisis, social issues and foreign affairs from a panel of journalists.

Among those watching will be the third-placed candidate from Sunday’s primary, Arnaud Montebourg, who took 17 percent with a protectionist campaign urging tougher controls on financial markets.

He has said he will choose which candidate to endorse after the debate.

“France will find itself in 2012 at a decisive moment in its history. We on the left have no right to miss this appointment with the French people, who expect us to be at their service, effective and united,” she said.

Hollande thanked Royal, saying: “I salute the elegance and responsibility of she who was our candidate in 2007 and who knows the importance of bringing people together to give us strength in the electoral battle.”

In a terse statement, Aubry’s office said the candidate respected Royal’s”personal choice” to back Hollande.

Hollande and Royal lived as a couple for almost three decades and raised four children but split shortly before Royal’s unsuccessful 2007 election campaign — although the break-up was kept secret until polls closed.

Royal’s relations with both Hollande and Aubry have been testy and it was not initially clear whom she would back.

Royal believes Aubry’s supporters rigged an internal Socialist Party vote to bar her from becoming party leader and relations with Hollande soured when he moved in with a new girlfriend, who he has called: “the woman of my life.”

Hollande has also won the support of the last placed candidates from Sunday’s first round, lawmakers Manuel Valls and Jean-Michel Baylet, both seen as being on the right wing of the left.

A public opinion poll by firm OpinionWay-Fiducial for newspaper Le Figaro released on Tuesday showed Hollande in the lead with 54 percent support against Aubry’s 46 percent.

Both Hollande and Aubry hail from the ideological centre ground within the party, but Aubry tacked to the left during the primary campaign, rallying the party’s base in a time of austerity and economic crisis.

The US-style open primary, a political novelty in France, has proven popular and given a boost to Socialist electoral hopes.

More than 2.5 million voters turned out for Sunday’s first-round vote and more than 4.9 million watched the first primary debate in mid-September. 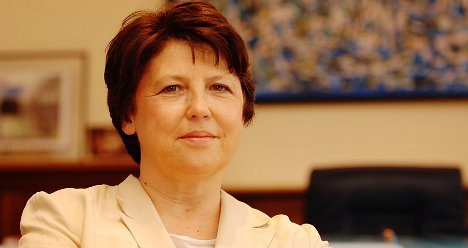 Photo: Incorruptible
"Land is not hard to find. The state owns lands everywhere," Aubry stated in a press conference in Lille on Monday.
The Socialist Party leader denied reports that she had fallen out with the interior minister Manuel Valls over the dismantling of Roma camps in the city, arguing that it is the manner of the closures that she objects to, according to an AFP news agency report.
"We have demanded that this evacuation would be carried out with the relocation to another site outside of the urban area, but this has not been done," she said.
She furthermore rejected any parallels between current government policy with that of Francois Hollande's predecessor Nicolas Sarkozy, praising Prime Minister Jean-Marc Ayrault for taking a tough stance on Romania and Bulgaria.
Aubry is not opposed to the camp closures in themselves but has demanded that they are carried out with more "dignity" and that alternatives are provided.
"We are working with the prefect to find land outside the city," she said, referring to the state representative in the region.
With Francois Hollande's blessing, Interior Minister Manuel Valls has continued the previous government's policy of dismantling camps and repatriating hundreds of Roma to Romania and Bulgaria.
In preparation for deportation, there are plans to house the Roma in so-called integration villages, slammed as little more than "ghettos" by government critics.
The hardline stance is however popular with the public and makes political sense, according to analysts.
"Hollande and Valls don't want to give a centimetre of ground to the right on security issues," said Jerome Fourquet of polling institute Ifop to AFP. "They're trying to curtail the idea that the left is soft on crime."
But Valls' approach has not been received well by Green members of the government and some other ministers, who will meet with Jean-Marc Ayrault on Wednesday in a bid to reshape the policy.
Martine Aubry was among those who criticised Nicolas Sarkozy for being "anti-democratic" after his speech in Grenoble in July 2010 in which he outlined plans for the dismantling of the camps.
Her stance has been cited as a contributory factor to a number of Roma moving to Lille hoping for a softer approach from the authorities.
SHOW COMMENTS
Url copied to clipboard!