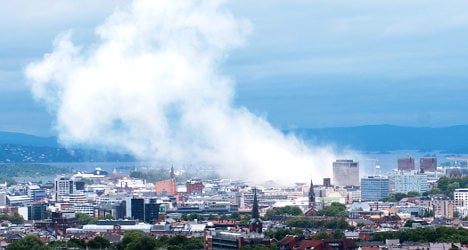 Depending on whether the government decides to tear the buildings down entirely, partially or repair them, the final bill could total between three and six billion kroner ($523 million-$1.05 billion),
Government Administration Minister Rigmor Aasrud said.

"The buildings need to be cleaned up and then we will study the architectonic conditions to determine whether to tear down the buildings or repair them," she told commercial television station TV2.

"We hope to be able to make a decision around Christmas," she said, speaking at one of the blown-out buildings and wearing a construction hat and mask to protect her from the dust.

Norwegian authorities organised on Tuesday the first visit of the government headquarters for the media since right-wing extremist Anders Behring Breivik set off a car bomb in a van parked under the buildings, killing eight people.

The buildings most heavily damaged by the bomb, estimated at almost a tonne, were the Oil and Energy Ministry and the Prime Minister's Office, under which the van was parked.

The 17-storey building housing the Prime Minister's Office, which also housed the Justice Ministry, was about to be declared a heritage site when the bomb exploded.

Police had since 2004 recommended that traffic be blocked off on the street outside the government headquarters, but it had not yet been carried out.

After setting off the car bomb, Behring Breivik went to the island of Utøya, some 40 kilometres outside of Oslo, where he shot dead 69 people attending a Labour Party youth camp.

Behring Breivik, who has expressed his hatred for Western-style democracy because it spawned the multicultural society he loathed, is being held in solitary confinement.