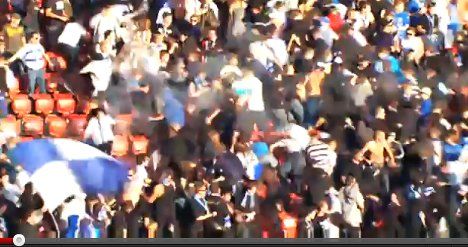 In an interview with newspaper Der Sonntag, Matthias Remund, director of the Federal Office of Sports said authorities will tighten the screws on hooligans. He said it is especially important to know who is in the stadium, and proposed three measures: prohibiting fireworks at games; banning flags, so hooligans cannot cover their faces; and introducing tickets with integrated electronic identity codes.

“It is sad to think that in the future it will be necessary to come to the stadium two hours before the game, as it is at airports,” Remund said.

The measures will be discussed this week during the conference of cantonal justice and police directors (CDJP).

Hooliganism has been a long-standing problem in Switzerland, but the violence that broke out during the October 2nd derby game between Grasshoper FC and FC Zurich was the final straw. It was the first time in the history of Swiss football that a professional match was abandoned due to rioting.

Zurich authorities are already considering the introduction of electronic bracelets for fans banned from stadiums, the canton’s chief of justice, Martin Graf, told newspaper NZZ am Sonntag. The devices will send out a radio signal when the bearer enters a defined perimeter.

The Grasshopper FC-Zurich FC game was first stopped after fans threw firecrackers, but restarted a few minutes later. The referee finally decided to end the game after 77 minutes due to continued unrest with hosts Grasshopper leading 2-1.