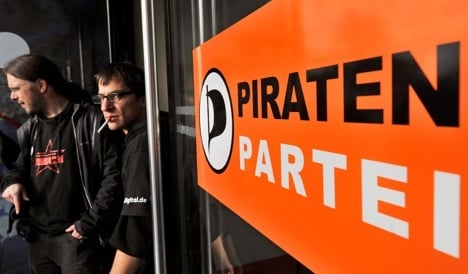 In a survey for the Bild am Sonntag newspaper, polling company Emnid found the party, which emphasizes civil liberties and governmental transparency, two percentage points more popular than a week before.

A similar result in the 2013 general election would make the Pirates the fourth-strongest political party in Germany – well ahead of the hard-line socialist Left (Die Linke) party and the pro-business Free Democrats (FDP).

Whereas support for The Left stayed at seven percent, the FDP hit a historic low of three percent – below the five-percent hurdle needed to get seats in parliament.

Chancellor Angela Merkel’s conservative Christian Democrats (CDU) on 32 percent remained the strongest party in the poll. The centre-left Social Democrats (SPD) on 28 percent and the environmentalist Green on 17 percent also both held steady from the previous week.

The Pirate Party shocked Germany’s political establishment by wining nearly nine percent of the vote in Berlin’s state poll last month. The motley group of novice politicians has since declared its intention to take the movement nationwide.

FDP General Secretary Christian Lindner told news magazine Der Spiegel on Sunday that the success of the Pirates could offer inspiration to his own beleaguered party.

“There’s a growing wish for privacy and freedom on the internet that we share,” Lindner said. “One can learn a bit from the Pirates, but it’s better not to try to copy them.”

Emnid surveyed 3,257 people in Germany from September 29 to October 5 for the poll.